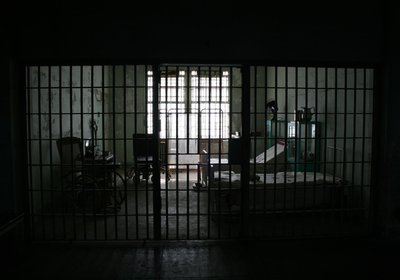 
Leon Uris Is My Favorite Author

The last time I was in jail it was November. The streets were wet and from the cell that I was in you could see the rain beading on the windows of the cars parked down below.

It wasn’t a cell really. It was a big room, a holding tank: the drunk tank. It was a fish tank for drunks, and it’s true it was difficult to breathe. The rain and grey light through the narrow, metal-reinforced windows added to the claustrophobia in the tank, the sense of drowning. All the fish wore orange. It was a goldfish tank.

To be clear, I wasn’t a drunk. Sure, I had been drunk directly preceding my arrest, but I wasn’t a drunk. It would be an insult to drunks if I identified as one. Something like cultural appropriation. I was only twenty-seven, a novice, I rarely drank in the morning (unless I’d been drinking all night and it just happened to be morning).

It was the only jail I’ve ever been in that had windows the prisoners could look out. I suppose that sounds humane, to have windows to look out, but after I noticed I could see the café on 2nd and Jackson, the one I used to go to when I worked downtown, after I noticed that, I stopped looking out the window at the world that was now shut-off from me.

I had been in jail enough times to know that you could ask for books. When the food trays came, I asked a guard, very quietly, if he could get me one. In jail, people who read are considered, well, gay. I don’t usually mind when people think I’m gay, (it does happen, I’m from southern Indiana, where they also think you’re gay if you read), but jail isn’t exactly the best place to be thought of that way.

The Bible might be the only book you can read in jail and not be thought of as gay.

“A book?” the guard said, suspiciously.

“What kind of book?”

“Sure, if that’s all you have, but really anything’s fine.”

The guard seemed to think about it for a while, and then said, “I’ll see what I can do.”

I never saw him again.

A few hours later a different guard opened the door.

Walton means essentially, “foreigner,” and in jail I never felt so aptly named. I was a foreigner there. Jail and southern Indiana aren’t the only places I feel like a foreigner, but they are two of the least desirable. I’m guessing a few others also felt like foreigners there, but I wouldn’t know. I tried not to talk to anyone if I could help it. Jail isn’t exactly, for me anyway, my preferred place to make friends. Talking to people in jail is generally considered … well, you get the picture.

As I walked over to the door, I thought maybe I was being released. Perhaps someone had bailed me out. But who? I didn’t call anyone to tell them I was in jail. I was trying to think who might have found out I was there. I purposely didn’t tell my girlfriend, for fear she might dump me, which she did anyway. Maybe she found out somehow, and overcame her shock and disappointment to forgive me and bail me out. I was thinking how wonderful she was, what a fine gesture it was, when I got to the door.

“You wanted a book?” the guard said.

“Ahh,” I said, disappointed not to be released, “yes, please.”

“Will this do?” he slid a book through the slot in the steel door. I didn’t recognize the title, or author, but it was a book and I couldn’t care less what kind of book it was. The fact that it wasn’t the Bible was a relief. I just needed to read, to escape. I wasn’t looking for moral instruction or origin stories. I was well aware of how I wound up there. In jail. The book he handed me was some sort of mystery or thriller. I could tell by the overtly symbolic objects arranged on the cover - a seal or stamp of some kind, white gloves – and the font dripping blood.

I walked back over to my bunk, of which my bed took up the lower half. On the upper half lived an enormous man who barely fit into his orange outfit. He was laying on his side, looking at me, I lowered my eyes and looked at the book. When I got to my bunk, I crawled under his fat belly that hung like a curtain over the side. Every time the food trays came, this man grunted and huffed and coughed a phlegmy cough as he climbed down from above. His huge, fat stomach flapping down the rungs of the ladder. I tried not to make eye contact with him, or his stomach, or any part of anyone else for that matter.

I read that book cover to cover. And then started reading it again. I was chain-reading, hotboxing it. I never left my bed the rest of the time I was there. Three days it turned out. I stopped eating. I refused my food tray. My bunkmate noticed and asked if he could eat it. “Yes.” He traded my whole tray one night for a cigarette butt someone had somehow smuggled in. I tried not to wonder how they’d done it, and how it must’ve tasted when my bunkmate smoked it.

Sometimes now I think about buying that book, or checking it out from the library. I sort of miss it. Like you might miss macaroni and cheese, or chicken soup. It was one of the most important books I’ve ever held in my hands.

It makes little sense why life should be so painful. Until you consider gravity’s constant, unrelenting pressure. It is the supreme oppression. I think this is why it’s so easy for us to feel as if we’re victims. Because we are. All of us. How could we not be in such a world?

I do wonder if certain political upheavals are at their foundations more about a vague sense of oppression, a gravitational oppression or general discontent. We’re primed for insurrection. There’s always time to add the specific issues of revolt later. How easy it is to rally others with slogans asking for change when all of us are trapped by the laws of physics. I’m surprised there aren’t more Christianias, more CHOPs, more Nimbins, more Jan Sixes and more October Revolutions. To where got the Grateful Dead parking lot? I suppose we have fentanyl now.

In this I think I’m aligned with Pascal, who knew well the forces of gravity. I can’t relate to those who do not walk around with that huge black boot weighing on their necks. Space is not the right word. Nor infinity. Not empty, void, hole or pit. All our shuffled lexicon’s unable to describe it.

Perhaps I’m being too linguistic. For some people language is only a tool with which to buy beans or bread at the market. But for those of us concerned with affecting the sense of beauty – that is, for those of us concerned with art – language is a midden of empty shells left after our attempts to cast spells that would trick a moment into lasting forever.

I suppose you could also just go swimming. After all, what need is there for revolution, or writing, when the water’s fine and the breeze is right? I’m guessing no one ever stormed a castle who knew how to surf.

These Are the Things I Can Do Without

They put a bank where the gay bar was. I’d say that pretty much sums it up. What’s happened to the neighborhood. To the city, really. It was a dive bar. Everybody went there.

They still had an old-school jukebox, and you could play just about any song you could think of, as long as it was gay. Five songs for a dollar, which when you’re drunk enough, seems like a great deal. They had Madonna, Cher, Barbara Streisand, Rick Izaaks, George Michael, Culture Club, YMCA, etc. All the classic hits. We mostly played Queen or Morrisey.

One night with Jordan – who was going through a break-up – we played all the Chet Baker songs they had. I think it cost us ten bucks, a double album. There were some drunk queens in drag who were pissed, “oh honey this man is so depressing,” they yelled at the beginning of each song. “Play some Diana Ross will you, puh leeze!” but we’d already made our selections and they complained for an hour and more about how you can’t dance to “this jazz shit or whatever it is. Honey what is this!”

After “My Funny Valentine” one of them yelled at the bartender, “Sweetie bring me another drink before I slit my wrists.” The whole bar laughed, and Jordan was cured of his broken heart.

But that’s all done. There’s a bank there now and nobody plays music or gives hand jobs in the booth near the bathroom while Tears for Fears sings “Shout. Shout. Let it all out …”

When the bank opened, they put a pride flag in the window for a few months, as a sort of gesture of respect I guess, but they eventually took it down. Sometimes when I walk by there I can still hear the music, “You shouldn’t have to sell your soul.” 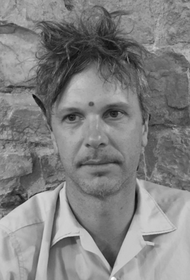