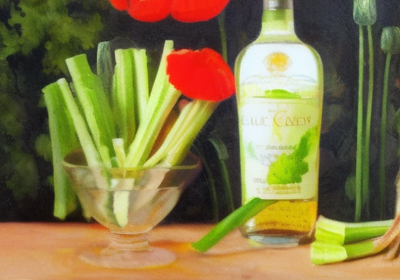 arrots missed the bus and had to walk along the busy road, all in her lace. Grandpa Onions was visiting from the countryside, and was on his fourth glass of wine when Carrots arrived home sweating. Celery was stinking in his rattan chair and humoring old Onions, who turned sweet in his drunkenness. “How many generations has your family lived in that cottage?” Celery asked Onions.

“We settled right in that spot because it’s where Satan bounced when He fell to the earth,” said Onions. “So, I expect we’ve been there since just after the Expulsion from Eden.”

“How high did he bounce?”

“That’s been lost to time,” said Onions. “But He fell very far, so I always imagined that He bounced up to the level of the cottage roof that was yet to come.”

Celery opened his arms wide. “It isn’t a party until Garlic and Parsley are here! Welcome, friends.” Carrots handed them glasses of wine while they were barely across the threshold. Garlic brought funny anecdotes from his job as a master builder. Parsley came with her mellifluous laughter, an itchy green dress, and some herb. She winked at Carrots.

“Don’t think you’re pulling one over on Grandpa,” said Onions. “I know what you kids get up to. Celery reeks of it. No, no. I don’t want any. I’ll stick to my wine, and maybe some sherry.”

Celery was just shutting the door when Pancetta slipped in.

“Don’t give her any of that stuff,” said Onions. “It’ll mess up the baby.” He was looking at her belly.

“I’m not pregnant,” said Pancetta, hurrying to the kitchen so no one could see her tears. She threw salt over her left shoulder and then her right, just in case.

Carrots and Parsley had come to despise Leeks, who had been so finished by finishing school, her only facial expression was as neutral and tactful as Switzerland. Celery’s cousin Celeriac had brought Leeks over for a ladies’ tea, and was doing her best to have everyone get along.

“If you put a book under your pillow, you osmose the meaning in your sleep. It’s called passive learning, and your dreams digest it all for you,” said Celeriac. “Do you absorb the contents of a book when it’s balanced on your head?”

“Oh, I shouldn’t think so,” said Leeks blankly. “Nothing should seep through if you balance it properly.” Parsley tittered. Carrots watched in disgust as Leeks chewed her scone precisely 100 times.

Garlic the master builder was in the provinces looking at Onion’s cottage, which needed a lot of work done. The most urgent thing was retiling the roof, but the foundation was also cracking. Onions had an astonishingly beautiful flower garden, filled with morning glories, poppies, and oleander that made your heart skip.

Tomatoes climbed over the rotting wooden fence that separated their property. “There’s a fox sniffing around lately,” he told Onions and Garlic. Tomatoes looked like the sun always turned to face him.

“Is it a real fox or a symbolic fox?” asked Onions.

“Oh, I haven’t asked him,” said Tomatoes. “He’s a beautiful creature, but I would watch out for your chickens.”

“We ate the last chicken at least 10 years ago,” said Onions.

“The fox will keep looking for them. He is haunted by their memory.” That was said by Bell Peppers, the local priest who was walking by the garden gate. “Shall we pray for him?”

“I’d like to get back to surveying,” said Garlic, taking the pencil from behind his ear. “This cottage needs a lot of work.”

“So does everyone’s soul,” said Bell Peppers. “Especially in this accursed garden.”

There she was in the sauna: Leeks in her elegant black bikini, barely sweating. Carrots pulled Celery away toward the salt cave, hoping to avoid getting into an infuriatingly polite conversation about nothing. Leeks did see them, but she mercifully waved at them with her palm and elbow like a queen, and let them flee.

At the entrance to the salt cave, they were greeted by the spa’s proprietor. “You are in for a treat,” said Cabbage. “Our new salt cave recreates the Polish salt mines of my youth with 20 tons of pure pink salt. You’ll relax in a zero-gravity chair, listen to ambient music, and absorb 84 trace elements and minerals.”

“That sounds great, thanks,” said Celery. When they entered the cave, led by Cabbage, they found Parsley Root napping in a hammock. Parsley Root awoke with a start and fixed her eyes on Carrots.

“Where’s my Parsley,” she said.

“Oh, is she here?” said Carrots looking around hopefully.

Parsley Root slumped back in her hammock. “I was just dreaming that she was in prison, and she was being abused and tortured. Something must be very wrong. A mother always knows when something is wrong.”

“My daughter is in trouble, I just know it. Get me to a phone.”

There was no reception in the salt cave, so Parsley Root took Carrots’ phone out to the lobby. Parsley’s phone rang and rang and went to voicemail, but just as Parsley Root was leaving a rambling message, Parsley called her back.

“Sorry I missed your call, Mom,” she said. “I’m rushing to finish the essay for my Soviet history class, and I’m waist-deep in books on the gulag.”

The grandfather, the grandson-in-law, and the Holy priest had walked into a bar, which was empty except for the agnostic bartender. Onions and Bell Peppers were glowering at each other.

“Perhaps you should start by apologizing for sanctifying the land that Onions lives on without permission,” suggested Celery placidly. “And then Onions can apologize to you for, um, performing a lewd act in the church yard.”

The men stiffened, they bristled, but Celery smothered them with brandy, and Onions and Bell Peppers’ slowly softened and were gentle and silly by the end of the night. Celery was unused to brandy, and tried to keep up with the old men, but began to fall apart. That night he slept on a bench among the poppies in Onions’ garden. He woke in the pre-dawn, in time to glimpse an elegant creature slip away through the fence, with something that looked like a chicken hanging from its jaw.

"To Begin" is an excerpt from "Food Restrictions", which can be read in its entirety in the print edition of Issue 7. 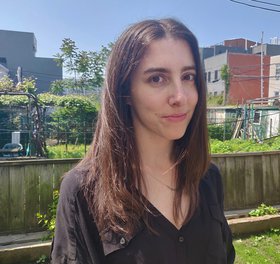