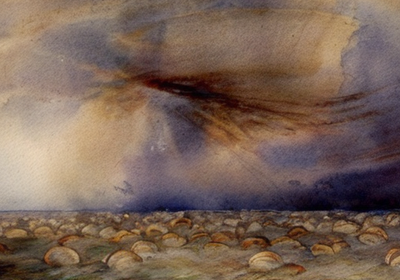 ortunately, these natural phenomena do not usually occur in Italy, where I live. At the very most, we get a little gusty wind. Apparently, hurricanes, typhoons and cyclones are basically one and the same. What they are called depends on the geographical area where they go through. In Japan they’re typhoons, I know that because I am visiting Japan and I just dodged one, typhoon number 12, called Jondari. I asked a Japanese friend of mine—Yuuki, I said, are these typhoons worse than hurricanes? and he answered, Nope, it’s the same thing. And what about cyclones? Same thing. I was a little bit ashamed, I have to say, I guess we lack this cyclonic culture here in Italy.

If I understand correctly, then, hurricanes and typhoons are just like orcas and killer whales, or tungsten and wolfram. Same thing. In all cases they are a vortex of low pressure that rotates on itself and is formed near the equator due to the overheating of the ocean and so on and so forth. In the US they are called hurricanes, in the North Pacific they are called typhoons and in the South Pacific cyclones. But what if a hurricane, after hitting the US, decides to go to the left, that is to the east when looking at the map? It could reach Japan and then it should become a typhoon. That would be very confusing.

Not to mention their names; apparently, usually hurricanes are female. Well, not anymore, male names were added several years ago. I don’t know if this is because the number of hurricanes has increased, or because there are more women meteorologists. Anyways, what they forgot to do, in Italian, is to match the gender to everything else. What’s the point, for example, of calling a hurricane “Katrina”? It should be “Hurricaness Katrina”. This thing of giving hurricanes people’s names doesn’t make that much sense. Hurricanes are bad news, see for example Katrina that wiped out New Orleans a few years ago. When you think “Katrina”, you picture a beautiful girl, maybe Russian or Moldovan, perhaps a tennis player, let’s say Katrina Makarova, a beautiful girl with a beautiful tennis-type body. Instead what you get is a hurricane that blows you away.

Apparently, it’s not like when a hurricane shows up, people who run the hurricane business call someone with a degree in literature, and ask them, Hey, there is a hurricane coming, what should we call it? And the literature graduate, with all their literary culture, says, I think we should call it Katrina, because it reminds them of some literary characters from Chekhov or Gogol. Nope, it doesn't work like that. Apparently, the lists of names are all ready to go. And whoever came up with them must surely be someone with a degree in literature, but now that the lists are done, they were given the boot. We no longer need a literature graduate for the job, a hurricane shows up and we already know what to call it.

If I remember well, it’s in alphabetical order, alternating female and male names. For example, in 2019 in the US the list started with Andrea, then Barry, Chantal, etcetera. Andrea is a girl’s name in the US, however here in Italy it’s a boy’s name. That’s quite confusing, not to mention that if a hurricane becomes a typhoon because it goes to Japan for a spin, the result would be some sort of gender-fluid, climatic-fluid phenomenon.

In addition, it seems that after a certain number of years, they restart from the beginning of the list. I believe it’s after six or seven years. But every now and again, as it turns out, some names are removed from the list. For example, Katrina. Great. First you call this terrible hurricane with the name of a beautiful Russian tennis player from one of Gogol's novels, then you realize the mess you’ve made so you remove it? Isn’t it a bit too late to change your mind? What about all the poor Russian girls named Katrina? Maybe there is one whose family lives in New Orleans because they immigrated, what should she do? Go to the town hall and change her name, just because of the literature graduate who wrote the list for which they were hired for a fixed term? If you really have to give hurricanes a person’s name (though I don’t understand why, other than it being the brilliant idea of some literature graduate), at least call them something else, something more appropriate, for example Attila, Adolf, Nero or Napoleon, things like that.

Paolo Pergola is the author of Reset (Sagging Meniscus, 2021), Passaggi—avventure di un autostoppista (Rides: The Adventures of a Hitchhiker) (Exorma, 2013) and Attraverso la finestra di Snell (Through Snell’s Window) (Italo Svevo Edizione, 2019). His work has appeared in several Italian literary magazines. He is a member of OPLEPO/Opificio di Letteratura Potenziale (Workshop of Potential Literature), Italy’s equivalent of France’s OULIPO. He lives in Tuscany and works as a zoologist.