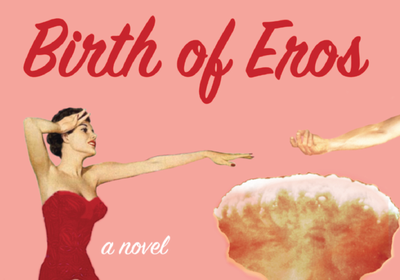 he 1950s hold a contested place in the American psyche like few other eras. Scorned in contemporary classics such as Sloan Wilson’s The Man in the Gray Flannel Suit and Richard Yates’ Revolutionary Road for its supposed emphasis on conformity, the decade has since undergone a rehabilitation of sorts as an era of hidden progress and ferment. Historian David Halberstam’s The Fifties is a decade that gave birth to the pill, not just Ozzie and Harriet; The Story of a Marriage in Andrew Sean Greer’s 1950s-set novel of that name is also the saga of a decade of percolating secrets far more complex that those exposed in Peyton Place. And now, just as most Americans who remember the 1950s spend much of their leisure time trying to recall where they have placed their reading glasses, experimental novelist Debra Di Blasi serves up a take on the period so fresh and outré that, upon reading it, Dwight Eisenhower might suffer yet another heart attack from beyond the grave.

Di Blasi’s Birth of Eros begins with the birth of Lucy, a homely infant (“nose lips cheeks jaw brow bone somehow wrong”) who enters Los Angeles in 1952 with a “left eye squinty from past ancestors” and a right eye “bulged with future progeny.” The right eye—“My Right Eye,” capitalized to its own identity—affords Lucy a panoramic view of the present and a periscopic bead on the future, allowing for the proleptical asides that distinguish the novella’s structure. Soon the reader learns, as does Lucy, that she has been thrust straight from the birth canal into the belly of the rollicking plot.

Lucy’s mother, Beauty, a stunning brunette (“Mannequin with breath, with wet. Lickable lips of mouth and cunt. A dream, a girl machine, a living doll”) has found employment with a shady automotive dealer, Big Bad Wolf, who seeks to transform her into the Dinah Shore of Fords, albeit one who far more resembles a teenage Veronica Lake. He also pressures Beauty into posing for X-rated photos which he sells to his “rich suckass pals.” Wolf’s undoing begins when he recruits Lucy’s future father (“tan pecs and overstuffed genitals”), a former underwear model once billed as “Tarzan of the Cosmopolitan Jungle,” to play Beauty’s husband in the showroom. The father had been blacklisted from newspaper ads over his mammoth organ, and as a result, he “no longer wore underwear, out of spite.” He reassured himself: “I’ll make the whole undie industry go bust by showin’ ’em panties are for girls.”

Alas, Beauty fails to recognize that her stage husband is not intended for her genuine mate. She is, after all, despite her beauty, a lonely girl who’d “stuff a man’s leather glove with cotton and slip it into her jacket pocket and hold it tight and go for a walk talking and holding hands with the glove of a man not there who she’d love better than best if he’d only just be . . .” Hence Lucy. Hence an innocent witness to this ill-fated pas de trois. In Lucy’s own words, “Lower math: Three plus one equals misery. Especially if one is a motherfucking car dealing money laundering pornmonger.”

Or maybe not so innocent. Like Oskar in The Tin Drum, Lucy is both child and adult, alive with a constant state of naïve wonder and yet wise to the ways of the world. She is named after Lucille Ball, the star of her father’s beloved sitcom, I Love Lucy. Yet she is also aware of her other nominal forebear, Saint Lucia of Syracuse, the Christian virgin who was defiled and had her “eyes torn out” and her neck hitched to oxen yoke.” In Birth of Eros, Lucy proves herself an eager, animated narrator at once fascinated and detached from her family’s undoing.

Di Blasi has a gift for grappling with challenging, timeless questions of ethics and justice, yet doing so in a manner that is neither hackneyed nor didactic. Lucy demands: “Define beauty. Give me the facts, the science, the phenomenon: Geometric perfection to electrify mathematicians . . . ? Tell me the function of beauty beyond titillation, beyond the buy & sell . . . ” She probes: “Who deserves to die? Where do you draw the line between abiding life and causing death? Which crime’s that Nth worse, that breath too much wind against the tightrope walker?” In lesser hands, these lines of inquiry might run the risk of transforming Birth of Eros into a novella of ideas. Yet the orchestrated chaos that surrounds these investigations—and that ultimately sees one character hogtied inside the trunk of a sedan—renders these moments into welcome palate cleansers of an intellectual bent. The result is a novella of ideas tucked into a comedy of manners and folded between the sheets of a satiric heist saga.

Di Blasi’s gift for lyrical prose ranks her among our most nimble wordsmiths, an author whose voice sings in a thousand different tunes—and yet remains distinctly recognizable. The verbal antics in her description of “fathermother’s” employer’s sexual shortcomings give a sense of how her prose sizzles:

Big Bad Wolf knew the depraved cravings of men. Knew his own sewn from the want of big cock more than of little cunt. Knew he’d never have the big to get the little, thus never get the whole balla wax. Never be the cat’s pajamas, cat’s meow—not even the cat, for that matter, fat cat though he was, with dough rising high in the Los Angeles sky like exhaust fumes from tailpipes of the thousand-plus automobiles he sold each year at the Sale-O-Rama.

With the caveat that some readers may find the juxtaposition of this electrifying language and the underlying content, especially episodes of sexual exploitation, disquieting, the contrast does serve its purposes, and the effect is as powerful as it proves unsettling. Lucy is the rare narrator who can capture the panoply of human sexuality without either shame or guilt, and the frank poetry of sex allows readers to form their own judgments. Di Blasi’s southern California striptease is not Holden Caulfield’s 1950s anymore—and thank the gods of Eros for that.

Innovative high jinks are hard to pull off in any literary form, but especially within the narrow confines of the novella. There’s a reason Tristram Shandy weighs in over six hundred pages and the average Pynchon novel can sink a small battleship. Setting such a daring novella against the backdrop of an already well-mined era, and peppering the prose with erotic imagery as seen from the point of view of an omniscient infant until the plot catches flame with the intensity of nitrate film, seems rather an ambitious task. That Di Blasi’s Birth of Eros rises to the occasion, and ensures the subsequent conflagration draws us in like primordial fire, is testament to the author’s searing imagination and red-hot literary courage. 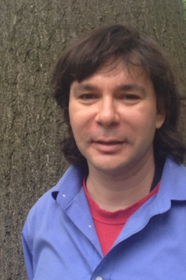 Jacob M. Appel is the author of many novels and short story collections including The Man Who Wouldn’t Stand Up, Scouting for the Reaper, Phoning Home, Einstein’s Beach House, and Millard Salter’s Last Day. His short fiction has appeared in many literary journals including Agni, Colorado Review, Gettysburg Review, and more. His essays have appeared in The New York Times, Chicago Tribune, Detroit Free Press, Orlando Sentinel, The Providence Journal, and many regional newspapers. He has taught most recently at Brown University, at the Gotham Writers’ Workshop in New York City, and at Yeshiva College, where he was the writer-in-residence.