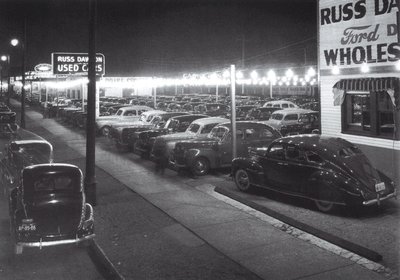 ig Bad Wolf owned the biggest car dealership in Los Angeles. Biggest Ford dealership in the country. He’d seen the father’s fabulous figure and figured he’d find a way to make it work for his weekend Sale-O-Rama, sucking in all the little wifeys by making all the big hubbies feel little in the crotch and hence in life. Beta male, zeta male, theta pi omega male, all demoted and deflated by the alpha male’s colossal prick demanding their attention: They could see its head a battering ram against the soft serge of his trousers.

The father no longer wore underwear, out of spite: “I’ll make the whole undie industry go bust by showin’ ’em panties are for girls.”

He tried to think of a way to get rich from the au naturel look, but it was too hard thinking, too hard to make something out of nothing. So after a week he forgot about thinking and settled into the comfort of swinging free and easy.

And he was free.

And he was easy.

“He’s the guy who’s gonna make you one rich motherfucker, that’s who.”

The father had balls, that’s for sure. And surfeit of cock. So that the stack of Jacksons should’ve been just a down payment on a sizeable loan. But Big Bad Wolf being what he was was so filled with envy at the sight of the father naked and proud—hung like a horse and hands on hips happy—that he shriveled up miserable, smaller than small, to nearly nothing, and his fatuous fuck’s face bled red to the cheeks and jowls, then went white. Sick he was, in skin and out, with rage against god and life and the father—all three, trinity wrapped up in one a-fucking-mazing sausage casing—that he closed his eyes briefly as if against a blinding bright light, and in that moment of darkness saw what he had to do, would do, could should do to the father: do: the only thing that would set the world straight and spinning right and fair: Wolf ass on a tree branch and mouthful of monkey meat.

In what’s left of the jungle the alpha chimp kills a baby monkey and sits hunched on a high branch peeling back the skin from the bitty belly.

That’s what beta chimp thinks. Thinks, I want. Reaches out his hairy hand. Thinks, Gimme! And alpha chimp looks at the outstretched hand, then at beta chimp’s eyes which are averted lest his request be misconstrued as demand. Alpha rips a piece of meat from the monkey’s belly. Nibbles it.

Alpha lifts high the meat. Thinks, What’ll you gimme for it?

The father reached for the Jacksons.

So the father signed the same contract the mother’d signed a year before. Fluid indenture, expandable: addendum after addendum tacked on whenever Big Bad Wolf wanted more than the fathermother’d give. Might as well been their souls they sold for all the money they’d see from it.

But all the money they’d see because of it? Another story.

We arrive, then, now at the moment. Narrow the past forward, squeeze the future backwards. It all comes down to a sliver between here and there, this and that, yes and no, stop and go. How when where one comes into being.

Sucks on his cigar. Rolls it between his shiny-spit lips. Pulls it out and looks at the smoldering head. Says to the father. “Wait’ll ya see this dame. I’d fucker myself ‘cept my wife’d have my nuts in a vise. Zif she didn’t already. Har har dee-har!”

“Har,” laughs the father, confused, until beauty walks in. Floats. Spring cloud of sweet meadow fragrance and rose petal skin and dove-flutter eyelashes all aflutter at him, fine fella, finest, she thought, she knew. She, like he, had such taste.

Mmm, I’d like to taste the skin of his neck.
Like to lick the salt from her thighs.
Give him a bushel and a peck.
Drown deep wet in her green wet eyes.

The moment’s come—ping!—and gone. You’re indelible now, already going to be, cannot not be undone by Time’s Arrow shot like the father’s wad.

Me, saint or virgin?

The father named me after Lucille Ball. I Love Lucy, his favorite TV show. Made him laugh, that Lucy. Lit his heart, tickled his funny bone, tripped him toward belief in goodness inside badness, the bad flaking off like dead skin revealing the creamy-pink babyass new good beneath.

In the beginning what I did not know fit snug inside the pockets of my little fists, so perfectly cozy I assumed that what was was what should be: The father adoring me, the mother abhorring me. Thought things fit the shape of things: every peg in its own hole, and some holes pegged and some not.

Wanted the mother’s love? Sure. Needed her love? Of course. Got her love? No. Blamed her? Never.

What I know now: The mother’s body betrayed her and thus she me. Hormones spfizzling out of control, firecracker warehouse and my father a lit match dropped, one tough motherfucking spermatozoon zooming upstream faster, further to the egg that must have looked like the reachable moon, luminescent, breakable crust, the battering ram of my father’s cockseed at the door.

The mother was never awestruck with motherhood motherwonder. Rather, changes in tits and ass manifested horror: Lon Chaney in a wig under a full moon, she thought. Grrrrrrrr-l! Moon of her belly-me signifying only the loss of waistline, skin tone and texture, varicose veins and stretch marks creepy-crawling like worms on pavement after a downpour.

“Going to pot,” she called it, standing naked in front of a full-length mirror, bursting into tears at the thought of the father fucking flat-bellied women, though he swore fidelity. Said he’d cut off the nose on his face to prove it. To which she replied, “Ick!” and bawled harder.

Not herself and growing less so. By the time she spit me out of her womb too many of the chemicals she was weren’t. And it wasn’t that she wouldn’t love me but that she couldn’t.

I’ll kill myself! No!

Please, I love you!

I watched the pretty lights between them scatter in ashen clutter around their ankles and I fell dead silent, corpse still, closing my eyes and disappearing into the teeming darkness behind my lids so I would not be the wedge of their cleaving.

Underspoken agreement on how it would be: me forever in the backseat of their 3-speed life. 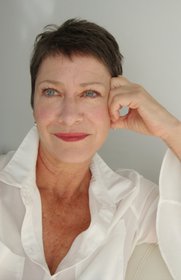 Debra Di Blasi is the author of ten books, including Selling the Farm: Descants from a Recollected Past, winner of the 2019 C&R Press Nonfiction Award. She is a former publisher, educator and art critic now dividing her time between the US and Portugal.