The characters within are all inventions and bear no resemblance to living persons. Only the writer is real. 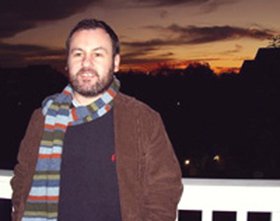