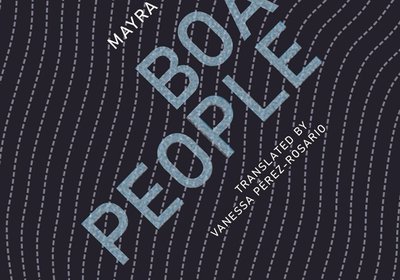 riginally published in 2005, Puerto Rican Mayra Santos-Febre’s Spanish-language Boat People is now available in English thanks to the keen translation of Vanessa Perez-Rosario. A poetry collection of the ocean, it’s enduring as fluid, as transformative as fixed.

It is also a collection of the people who move across the ocean’s surface. “how to / reach the sea? and not surrender midway / on the voyage hunting the dream / to eat.” (43). Santos-Febres has constructed a collection reflective of life and death upon the water. It is a book containing the storytelling of those who suffer and those who thrive, those who depart and those who arrive.

Boat People is introduced with subtly brutal imagery: “boat people / mangled bodies / onyx shark” (9). Violence and environmental horror are established from the very beginning of the collection in a vision that passes forward the full spectrum of oceanic horror. The constriction of sitting upon water, of the boat people’s lives in vast chaos, evokes a fascinating juxtaposition: hopelessness and fatalism meet borderlessness, freedom, and opportunity. Still, the ocean is one of cruelty and incessant obstacle: “scales of flesh fall / verging on the wave’s crest / tide after tide morenita / fall / fall / fall” (11) continues the second poem.

Pérez-Rosario provides an ample discussion of the book in her Translator’s Note, describing Santos-Febres’s poetry as illuminating those who are invisible, identifying life within the margins, and, more specifically, telling the stories of Caribbean people. While the book’s tenses feel of the present, of the undocumented migrants of the here and now, Pérez-Rosario astutely highlights that “boat people” is the term for Vietnamese refugees arriving to the United States by boat throughout the American War in Vietnam, and is also the term for “Haitians who risked their lives at sea during the Duvalier dictatorship” in the middle of the last century (75).

Santos-Febres connects the anonymous migration of the individual to the impossibly large collective whole. Abstraction and intimately precise language pushes and pulls the stories themselves into realms of imagination and hallucination.

The fatalism is amplified by a swollen language of stories of unacknowledgment and brutal survival: “identity unquestioned / and one more to the sea / a watery wilderness” (35). The poet calls forth the fragmentation of our discourse, at large, around the subject of migration along the margins, of consideration of refugees. She casts broad strokes and, moments before and moments later, narrow: “undocumented 4 / with a picture of a national hero in the raft / he plunged into the sea” (17). And she considers the relationship of the individual missing an identity; in transit; invisible. To consider their lives and movement when they are unseen, when they are invisible can be felt throughout the book and its title-less segments: “without papers / identities borrowed / floating under forged names” (49).

The book, 73 pages in total, is half the original Spanish and half new translation. It’s dense, contains unimaginable layers, and often, like the ocean itself, feels wholly untouchable. In their most quizzical moments, these poems provide arguments, resolutions, and conclusions from the perspective of the boat people: “insatiable the bloodline stretches along its coasts / the sea creates crystals confused with borders / refulgent things on foreign shores” (71).

“it’s a question of letting go / let go completely / see yourself become a drop / of fish sweat suddenly / swept up by a seagull” (71). Santo-Febres’s direction describes a painful position, incessant doom and horror, and the pressure to let the ocean, metaphorical or literal, guide.

The mesmerizing poetry of Santos-Febres comes to us from a world not far removed from 17 years ago, as the appearances of the migrating public seem to grow across the Mediterranean, the southern border of the United States, and, as I write this, neighbors of Ukraine; the work feels relevant in . Alongside more recent poetry collections investigating migrations of people (see: Desiree C. Bailey’s What Noise Against the Cane? (2021); Safiya Sinclair’s Cannibal (2016); Ocean Vuong’s Night Sky with Exit Wounds; and Caroline Bergvall’s Drift (2014), Santos-Febres’s Boat People offers us its own glimpses of the refugees, whose lives are often tenuously presented in news headlines. Parallels can be made to many, and more than once was I reminded of the ghosts within the Mexican desert from Juan Rulfo.

This new release, Boat People, has aged well and been given incredible newness. That we may witness it serve as a keystone work within the canon is nothing short of enlivening. But the to receive is to get, a horror experienced by many each day:

maybe in the ocean’s deep there’s an excess
of everything that suffocates here. (13) 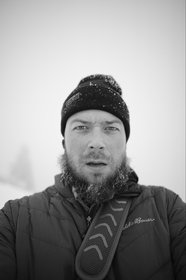 Greg Bem is a poet and librarian in Seattle.