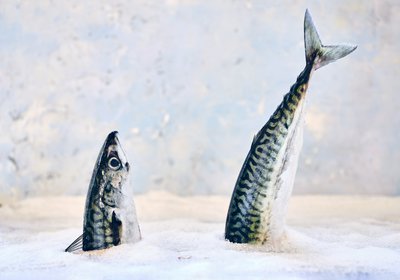 Girl With a Pearl Herring

y mother is the kind of sun-puckered asshole who brags to the women at work about the necklace her daughter made her, only to go home to that very daughter without bringing her Cheetos or Tang. Then, in the absence of my orange foods, has the nerve to bitch about those work women, somehow expecting me to care. You'd like her, though. She'd laugh at precisely the right moment you say something stupid to make her like you. But you’d get to go home after that chortling duet and I’d still have to sit by her on the sofa while she peels off her toenails.

Sometimes she gets so caught up in American Idol she accidentally harvests the pulp of her nailbed and then yowls like the worst contestant. But she doesn't let that stop her. She sucks air between her teeth and doubles down until the job’s done. By then everything's bleeding. After a night of picking, she'll be sore and mad at herself the next morning. She’ll rub coconut oil on her toes before work so they’ll glide freely against each other. But she uses so much oil it soaks through the cheap leather of her high heels and makes the tips like she’s stepped in a puddle of wax. Nobody dares ask her what's up with those shoes. Everybody’s super sweet to my mom because she’s a court clerk and she can take care of your speeding ticket with a few plasticky clicks of her fishing pole acrylics.

My toenails are painted orange. Same color as my All Stars and Orange Crush. They kind of smell like Velveeta, which I kinda like. I'm only telling you that to get the worst out of the way. I could have lied and said I don't sniff my peelings, but I try not to lie much. When I do, I eventually tell you about it.

So, I better tell you about mother's sofa. It's the same color blue as a Bic ballpoint. I know because I can write my name on the upholstery without anybody noticing. It has white cranes dancing on twisty black branches with red blossoms on the tips. Once I was rolling my head back and forth on the cushion to create static in my hair and my gum fell out. I rolled over the gob over and over and mashed it right into the fabric. And my hair. I picked and picked but it never did all come off the cushion. Eventually the pink turned black. And eventually the black turned shiny. Now it blends in pretty well with the trees. But I have to tell you, if I really give the edge a good picking, there's still some pink under there.

I lied and told my mother it was her friend Nancy’s gum. Nancy is always chewing gum with her mouth open, and she talks so damn much she forgets it’s in there. By some miracle it stays on course, agitating around and around like a front-load washer. Sometimes you’ll see it catch her by surprise when it attempts an escape and then it gets a real smackdown. Her jaws go into overdrive, teaching it a lesson in disobedience. Once her appeased jowls regain their composure, she’ll blow a few petite bubbles. Her tongue just barely sticks out of her wrinkled lip gasket to form a polite little pink pouch. Quite the feat coming from a yap like that.

Anyway, I’m just saying it’s no shocker that Nancy’s gum fell out onto the sofa. I mean, it didn’t really, but I wouldn’t have been surprised if it did. So, I told my mother that it was Nancy’s ass that steam-pressed her gum into the cushion. I probably said “bum” so my mother wouldn’t squirt orange Dial in my mouth. Anyway, I told you I eventually come clean about my lies and eventually I’ll come clean about this one. Just as soon as I get out of here.

My dad used to call my mom's friends the Birk-N-Bags because they sit around the pool acting all fancy, collecting carcinoma and drinking cosmos like they’re Sex and the City. Sex left that city a long time ago, my dad used to say. He'd look at them out the window and apologize that I could use a better role model. Half the time I swear he was out looking for one. I use past tense when I talk about him because he’s dead.

My dad idolized me because I make pearls. I mean, my body makes them, it’s not like I’m a jeweler or something. One time he stepped on a pink pearl at the bottom of our pool and he thought it must have fled the neck of one of the Birk-Ns. But it was from me. I didn’t know it at the time, of course. I hocked a loogie and spit it in the pool because I was all plugged up and also wanted to see if the current was strong enough to pull it into the filter drain. But my phlegm oyster sank right to the bottom. Since I didn’t know how to swim under water yet there was nothing I could do.

The origin of the pearl remained a mystery until I did it again. Only took a few months to produce another one, which is much faster than an oyster. They take five years. It stands to reason that I know more about pearls than most people. For example, I know that mine are non-nacreous which means they don’t have that rainbow-like luster that oyster pearls have. Mine are more like conch pearls. Oddly shaped and sometimes pinkish but usually more of a bronchial yellow. I refuse to let my mother tell my doctor about them because I know they’ll just conspire to sell me to the Bellagio. She doesn’t care what I do most of the time, but she’s all about me making more pearls. She has me eating three pink Tums before bed because she thinks that will make them grow faster and make them a nicer color. It’s not like I’m being forced into child labor. I’d eat Tums anyway because I go through half a jar of pickled herring before bed.

Mother clings to the theory that my body makes pearls because I’m so stuck on pickled herring. Like eating it is turning me into a fish, or something. How could that even… ugh, don’t get me started. I’ve tried to explain “science” to her a million times. Even if I did turn into a fish, I couldn’t make pearls because pearls don’t come from fish. Oh well, her brain swims in Triple Sec so I shouldn’t expect miracles. I do love pickled herring, though. My dad first let me taste it when I was ten. Kind of as a joke, because I always used to say, "I'll have what he's having." He thought I’d make a funny face but was surprised when I asked for more. He always ate it with chopsticks, so now I eat it with chopsticks too. He wasnt Asian, though. He was Swedish and he said that’s why I have straight blonde hair like Joni Mitchell.

You know what else makes my mother a flamboyant asshole? She has brown bread and coffee for breakfast every single day because that’s what Patti Smith does. She doesn’t even listen to Patti; she only read about her in Vogue. She listens to Train. Anybody who listens to Train has no right painting her toenails black or eating brown bread. I Iisten to Patti. And you know what I eat when I listen to her? Whatever the fuck I feel like.

I used to care what people think. Like, I was terrified when my hair started falling out in middle school. I thought it was because I rolled around on the sofa so much, but my doctor diagnosed me with stress-induced alopecia. I had to wear a wig and I was anxious kids would be able to tell. How could they not? I mean, that thing looked like a Halloween costume. Anyway, naturally the kids found out about my wig and, man, did they ever fuck me up. It was my first year in Vegas since moving here and I learned real quick that Vegas girls are tough. A gang of three got me cornered and yanked that wig off in one tug. Where the adhesive had stuck to my scalp around the edges, my skin pulled clear off and left a constellation of bloody pinholes. I had to go to the nurse’s office and that dumbass put Band-Aids on all the raw spots—stuck right onto my wispy hair. She didn’t even think about the fact that I’d eventually have to pull those bandages off. That shit hurt! So, I went home and soaked a long time in the pool to loosen them up. I just floated and floated and watched leaves get sucked into the filter drain and cried and cried. That’s why I hocked up that loogie and the pearl came out. I might not have their hair, but those girls can't spit pearls. 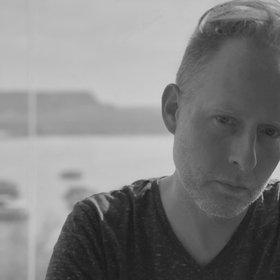