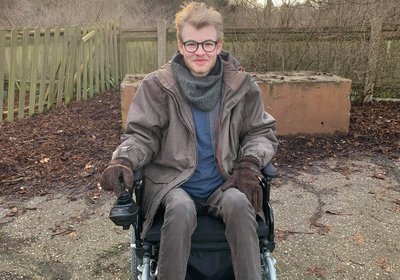 only ever make long posts to my friends on social media that aren’t just silly pictures when I’m unhappy and in a bad place. Every time I am (yet again) in hospital I am depressed, but I am safer (I think) in my hospital room.

I am in hospital this time (January 2022) partly because it is unsafe to be outside or even at home. My family have to work, my mum works in a school and schools are a primary vector for transmitting disease. Many healthcare workers are likely to be infected at home once close to their children.

My sister works in hospitality, catering to callous and uncaring people behaving recklessly as they eat and drink and party.

One of the hardest things about the pandemic as a disabled person has been watching people I know and care about do reckless shit that more or less communicates that they don’t really care what my quality of life is.

My family try to keep me safe, but they can’t control the actions of the wider public who may still infect them, as if it is somehow their choice to infect someone with a preventable, deadly disease. It is not one’s free choice to murder others.

And then the news of what the U.K. wishes to do in March is truly murderous, without pretence. Serial killers are condemned for directly murdering people, but implementing policies that kill thousands somehow doesn’t receive equal reproach. 12 years of austerity and the slow neglect and killing of disabled people was bad, this casual eugenics just continues.

It’s really exhausting how many people are currently of the mind that: “I’m not a eugenicist, how dare you call me that, but also I do believe my convenience is more important than our collective safety and the weak and inconvenient should simply vanish from society.” The pandemic being over means actually doing things to mitigate the spread of the virus and protect people from infection and death. So many believe in lies (about virology or life generally) at the expense of those most at risk. Other nations are better at this. Not doing stuff, not making sacrifices because you are weak-willed and privileged, means it will continue. Unrestricted behaviour without limitations means more death and an unfree, further inaccessible society.

Most do not care about those who haven’t been able to go out and live due to the risk increased with their disability, or those who still have to but aren’t given proper accommodations and support. The gall of some to say we have been successful in saving lives is a gross lie; the U.K. especially has done abysmally through this whole period.

Peoples’ words and petty defences mean less than their actions, which have only perpetuated harm towards people they revile or just do not care about.

Many disabled people and those who would still effectively be shielding are abandoned as the rest of society prefers the nasty, brutish, and short life to actually having our short time be worth anything.

I am already close to death and don’t wish to be closer due to the callousness of others. Even before the pandemic my life was isolated and lonely, mostly depressed and ruminating on my shortcomings and my impending death. What’s my projection? I’ve long maintained that it will be miraculous for me to reach 30 years old. I nearly died in May (2021). Any attempt I have to be happier or more optimistic feels like lying to myself. And each day I feel like I have less and less of an opportunity to do things. What could be considered worse in various ways than being explicit, obvious Nazis is that essentially millions of people across the world view mandates and their “personal freedoms” (when they are already free to do whatever the Hell they want, with no real idea of what lacking freedom actually means) as more important than life and death for vulnerable people. Do I have to temper my condemnation? Spurious ideas about “the economy” or one’s own convenience and choice to be harmful matter more than death, for them. They may recoil at the most obvious fascist tendencies or violent actions yet they are fine to actively contribute to or ignore death, suffering, and the real lack of freedoms. Mass death via neglect, incompetence, and indifference to life is as savage as death by malice and intent. Statistically it amounts to the same weight in corpses. The former is less expensive too, so people can remain comfortable while it happens and convince themselves that they are actually on the side of liberty and justice while depriving us of those very things - at least the so-called explicit Nazis or eugenicists are honest and you know where they stand. At least stab me in the front.

Am I too radical? Am I too hyperbolic? Am I exaggerating? Is it all too much? I know I am so wonderfully morally superior but am I upsetting them? I’m not even a terrorist or a killer and I don’t implement or support polices that kill thousands of the most vulnerable people alive, but I guess I’m the bad one.

Disability and illness, and what they represent in all their variances, have an existential weight attached to them. They are then often deliberately overlooked, undervalued, with their representations preferred dead or out of the way. One of the most fundamental aspects of existence is viewed instead as a narrow lens, a niche, rendered as unimportant or as malignant - out of fear, shame, utilitarian malevolence or stock ignorance. Misunderstood and put at a distance. Disability and its implications are reviled as they’re not a comfortable presence for many people.

Popular culture in any nation will not contend with pain, grief, illness, or disability (not always synonymous, but still) in any truly commendable or genuine way. We simply do not cope with life. Disability or ill-health is viewed as a personal failure to not work or do better before it is comprehended simply as reality often inescapable reality. And the needs of disabled people will always come after the needs of those who aren’t so when it most matters. Casual eugenics is the preferred state of affairs for many of us before accepting disabled life. Whole industries, much of civilisation, even, is dependent on making illness an easily comprehensible personal fault and truly escapable through enough effort, money, or spirit. Values held so commonly deem life worthless if it cannot be ‘productive’ in what is ultimately a terrible way to spend our short time.

Heaven forbid you make the healthies uncomfortable. One better not present a less than heroic image, lacking any glitzy optimism, no hard grit, or show anything that may make them a little upset. If illness is not presented in a way that makes those who aren’t ill or disabled comfortable, in their aloof world removed from real concerns, then good luck. Allow me to be a bit miserable. Or if I am somehow jovial, I don’t need false hope.

Pain and its minimisation, being able to be merely comfortable with the tiniest reprieve, is more important to me than most else. I am too ambivalent towards continuing life if doing so means being in an amount of pain than makes prolonging not worth the cost. This doesn’t then mean drugging me into complete catatonia so I feel nothing, I simply want to live without being so exhausted, without so much stress, before my premature death that I absolutely terrified of. I don’t want to shorten my life, but I end up being complacent and unable to do things that would prolong it because they cause far too much discomfort and distress.

The callous then suggest that not being able to stoically handle such pain is weakness or a moral failing. I will reserve using the worst words that I have for them.

I repeat that these people live in an entirely different and dismissive universe unattended to some of the most vital rudiments of the human condition - which involve sickness and disability. They believe the conceit that rendering life through the lens of disability is reductive, rather than experiencing life with a more essential primary theme. Obviously this does not mean that sick or disabled people are now soothsayers or immediately more knowing of the truth, and I hold no room at all for fetishisation or self-flagellating glorification, but, rather…

“…this matter of ill-health is more personal, more essentially of the ego than anything in the world; more than love, for that can be given expression; more than religion, because that is a satisfaction in itself; more than fear, for that passes. Pain is personal, before everything. Only one who has experienced it in some measure can understand its significance in life.” Richmond H. Hellyar in W. N. P. Barbellion (1926).

I just want some respite, even if true peace is impossible. Just treat people a little better. 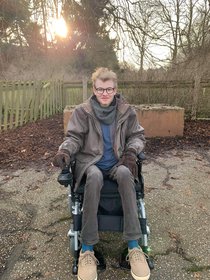 Jake Goldsmith, 24, is a writer with cystic fibrosis and the founder of The Barbellion Prize, a book prize for ill and disabled authors. He is the author of a memoir, Neither Weak Nor Obtuse.