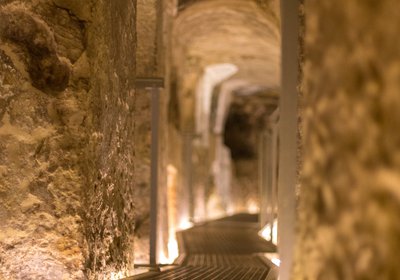 
SOMETHING INDEFINABLE.
IS IT EVEN FINDABLE?

“Half in love with easeful Death,”
do I expend my last ounce of breath?
Somehow Death is a great big tease
to put me at a peculiar ease,
almost perverted somehow.
Death and I are on sexual terms,
to fool around with near poison
to drag out a hidden thrill—
from the secret recess of a pill?
(But I don't take any pill.)
Something mysterious is going on,
or is it perhaps some criminal “con”?
All this is far-fetchedly beyond me,
yet close at hand that I can't deduct,
nor with timidity detect.
Certain thoughts are not fully explained,
yet in the barrier between “obscure” and “plain.”
My logical mind isn't always there.
It just goes out for a gulp of air.
Then it comes back to the familiar,
but what in the world is THAT?
Don't leave me on the verge of “abstract.”
Let's formulate some convivial pact,
and somehow reverse track.
What do I somehow detect?
Is it something in the form of a defect?
What in the world am I getting at?
This is difficult to break down.
Am I a clown? Or just wanting renown?
This is a mysterious case.
How does it start at the base?

THE ULTIMATE CONTEST,
RESULTED IN A LOP-SIDED CONQUEST.
THIS IS WHAT LIFE POSTHUMOUSLY CONFESSED.

When Death invades Life's territory,
they combine to become a sad terror story.
Life is terrified and must submit
to Death's cruel takeover bid.
Poor Life! What became of it?
It shrunk and became nothing at all,
for its sports lapse of “dropping the ball.”
So Life became immediately disqualified
from the useless luxury of remaining solidified,
having lost retention of its own self
by being fitted into an underground shelf,
having become too old to take good care of itself.
Now buried, the requisite corpse was out of breath,
having raced too hard to elude its fleet chaser, Death.
Flesh shrunk off, and only bones remained
as the permitted bare minimum to be retained.
Result? An overwhelming victory Death gained.
Print that in the “Sporting Chronicle”:
a crushing defeat for the Biological.

NEXT TO THE ROUND CLOCK,
LET YOUR WANDERING BOAT DOCK.
NUMERICALLY TUNE YOURSELF IN
TO WHAT'S CURRENT, IN ORDER TO WIN.

The clock's only concerns are seconds, minutes, and hours.
Those are its only buds that bear flowers.
It ignores weeks, months, and years,
also centuries and epochs.
So now we know what clocks are for.
Other temporal measurements we can ignore.
Whatever is relevant or pertinent,
concentrate on, one hundred percent.
On consciousness, let those make a dent.
Seconds, minutes, and hours,
concentrate on. They're ours.
Let's also sharply be aware
(other people will want to eagerly share)
of weeks, months, and years.
On those topics, don't be in arrears.
We're all in this boat together.
Let it float in any weather,
depending on where you are,
under the province of this earth's star.
If you're up to date, you'll go far.
All humans, linked in society,
share of the earth's luminous variety.
Along the borders of time and space,
keep your orders, confined in place. 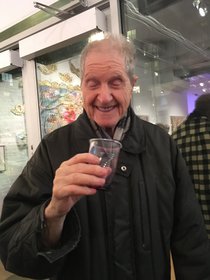 Marvin Cohen is the author of many novels, plays, and collections of essays, stories, and poems. His shorter work has appeared in over 100 magazines and books, including: Ambit, Antaeus, Assembling, Center Magazine, Cricket Addict’s Archive, Essaying Essays, Extensions, Harper’s Bazaar, Hudson Review, Monk’s Pond, The Nation, National Camp Director’s Guide, New Directions in Prose andPoetry, The New York Times, Plays from the New York Shakespeare Festival, The Pushcart Prize, Quarterly Review of Literature, Salmagundi, Sun and Moon, Transatlantic Review, The Village Voice, Vogue (UK), and Wormwood Review. His work has been performed on radio and theatres in the USA and the UK, including readings at the Poets at the Public Series, featuring, amongst others, Richard Dreyfuss and Wallace Shawn.

Born in Brooklyn in 1931, Cohen has described himself as one who has “risen from lower-class background to lower-class foreground.” He studied art at Cooper Union but left college to focus on writing, supporting himself with a series of odd jobs, from mink farmer to merchant seaman. He later taught creative writing at various New York colleges, including The New School, the City College of New York and Adelphi University.

For a long time, Marvin Cohen has lived in the Lower East Side, New York City, with his wife Candace.