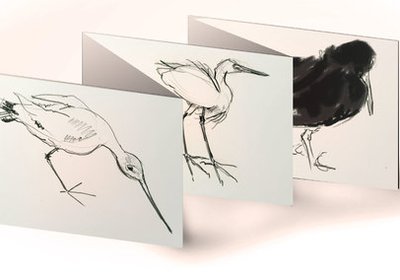 
kittee-wa-aaake, kitte-wa-aaake,
tucks in his neck and
brooding
dips black tips into the buffeting.
Looks inland,
out to the island,
rejects them both for auxiliary silt—
arcs
alights on the silt,
scoops great armfuls of air on the mile down
shoos the air cushion away with his wings
grasps at solid sea-bed silt with his feet,
leaves his grace in the cloakroom
takes the ticket
waddles travel-stiff on the tide-ribboned silt,
inspects a black wormcast—
a tourist in the museum of fine art.

‘There never was a future for alchemy, not while we could transmute base instincts into gold.’ That’s what de la Cour said to me. ‘Alchemists were too ambitious. But take the men in ballistics. They take the same lead the alchemists did and, merely by firing it into some poor sod on the battlefield, they fill their banks to bursting with solid gold.’

That took longer than anticipated. De la Cour kept going off on tangents. He wandered about his office, pausing at his desk to crack hazelnuts with a tarnished steel nutcracker—a simple sloppy hinge—but he never returned to his point. It was as if his thoughts came out of the nuts.

And now, announcing himself with a sharp rap on the car window, Commandant de la Cour’s grinning face has appeared on the other side of it. What on earth can he have to say to me here he couldn’t already have said in his office?

‘Wait a moment please, driver.’ I struggle to wind the window down with my left hand.

‘You will need this, corporal,’ de la Cour says, slipping an envelope through the sliver of open window. ‘This is The Matter In Hand.’

Even as he is saying this, de la Cour pats the hollow rump of the car and it duly pulls away from the kerb, towards the gatehouse that marks the exit from the red-brick barracks.

It wasn’t only the nuts. De la Cour plucked a lead musket ball from his desk and held it up to the light for me to examine but, as I reached him, he snatched it down to his chest, squeezing the musket ball tight in his fist.

‘It takes a supernova to make gold ordinarily,’ he said. ‘Did you know that? The languid death of a modest star like our sun just won’t do the trick. But with a little puff of gunpowder energy, the men in ballistics achieve the same, here, on terra firma.’

A little toss, then de la Cour carefully placed the flat face of the musket ball, the face that remembers its discharge, back on his desk. As the briefing wore on, it sat at rest among half a dozen pieces of corroded shot, as celestial bodies might while Euclid slept.

The driver’s feet work a moment’s pause from the pedals as deftly as a tango dancer while the sentry raises the barrier, ushering us into residential streets flanked by bungalows. I sit back in the bucket seat, releasing its musty odour, looking at de la Cour’s tardy envelope and wondering if its late delivery was a dirty trick.

As the car makes a right turn, I lift the ungummed flap and squeeze its edges until the envelope opens like an eye. I slide two fingers in and retrieve—an aerial photograph. A circular birds’ eye view capturing some kind of peninsula on its left, and several enormous sandbanks out to sea on the right. Foulness Island, naturally. It looks remarkably like a finch’s wing stretched out for examination, that is, if the island forms the scapulars and Maplin Sands provides the primary and secondary flights. These are de la Cour’s firing ranges—the sandbanks he just told me about, at length, upon which experimental weapons have been proved for a century.

‘I know what they will have told you,’ de la Cour said to me, dismissively. ‘But our business here at Shoeburyness is debunking ballistics. Finding out just how far and fast something will really go, and what it will accomplish when it gets there. Take this, for example.’

With one hand he took, from between the nuts and musket balls, a small damp piece of cast steel. It was so dense I was obliged to receive it with both hands. There was a dent in the middle the size of a golf ball. He rocked on the balls of his feet. ‘One would have expected a bit more damage than that,’ he said, ‘if one were to believe the manufacturer’s claims. Right now I’ve got half a dozen men mudlarking off Foulness Island, retrieving bits of their prototype. Another assault on the public purse has been repelled.’

I look out of the car window, wondering when we will pass through the fag-burn perimeter of the aerial photograph onto Foulness Island. Outside there are only civilian bungalows, hunkered down as if afraid of stray ordnance, and between these clusters, brown fields. We continue along rough ochre roads, their black seams protruding like canine gums.

‘This!—however—is what we’re aiming for,’ de la Cour had said, crossing the room to remove another piece of steel plate from the wall where it hung proudly among watercolours and photographs of men posing with ordnance, as if for magazine advertisements. ‘Guess the range on that one, corporal,’ he said, returning to me and swapping it for the dented one.

He leaned back against the front of his desk. There was a “crack” and he picked through the ruins of the shell on his palm for the kernel. I held the steel up to the light, half an inch thick with an esplanade of seven holes in it. Of course I have no idea about such things so, for no particular reason, I thought of the distance between my flat in London and the parade of shops.

‘Thirty yards!’ he laughed. ‘Closer to a hundred. You might have seen those in action during the War.’

The car enters a village held together by a T-junction. My eyes snatch its name from the blurred sign: GREAT WAKERING. A quick heel-drop from the driver and we lurch right, away from the squat stone church, in accordance with a signpost indicating FOULNESS.

That wasn’t the only piece of trophy steel displayed on the Commandant’s wall, among silver gelatine prints. De la Cour uncrossed his ankles and levered himself up from the edge of the desk, leading me by the elbow to admire them.

‘Our patron saint,’ he said to me, tapping a picture of a portly man in a top hat standing next to a small tripod. Another much larger version of that tripod enclosed them, as one might see in a stained glass window—a tiny version of the church one is standing in resting on its patron saint’s arm.

‘William Hale, here, was a self-taught inventor. Colchester born and bred. He came down here to Shoeburyness to test these revolutionary stickless war-rockets. Lieutenant-Colonel Shrapnel followed in his footsteps and the upshot is no window pane in the parish predates eighteen-sixty-one.’

De la Cour proudly indicated another of the Old Gunnery School's old boys, a gastropodic gun christened "Big Will". It looked like something between a church bell and a diving bell, riveted to the extreme front of a pair of rocking horse runners. A bored gunner stood in front for scale.

De la Cour moved on to a neighbouring photograph. ‘This eighty-tonner always reminds me of a Madonna and Child.’ One vast gun was mounted on a railway sleigh with a tiny cannon parked in front, yet the sentiment transformed the loitering, bearded gunner into Joseph—made of different stuff to his wife and son. A ram-rod formed from the best part of a tree was laid in front.

I glanced back at Big Will and imagined the monster rocking back and forth after firing, an untuned ringing, nodding without sense like a shell-shocked imbecile. I was becoming fascinated.

‘And this one, sir?’ I asked, pointing to a gun that hung like a puppet from a cradle of pulleys and cables as it was lifted from a boat.

‘A hundred tonner! You have a good eye, corporal,’ he chuckled. ‘See that barge? The Gog, "gathering them together to battle, the number of whom is as the sand of the sea." But, alas,’ said de la Cour, turning away from his peculiar gallery, ‘that was all in the Golden Age.’ He returned to his position against his desk and sighed. ‘As Archimedes said, perhaps to his wife: “give me a lever big enough and I’ll move the earth for you.” You know, my worker bees up on Foulness Island, on the back of an envelope in the canteen, they will actually calculate the exact length required to lever the earth? That’s their idea of leisure! You see what I’m up against?’

The brakes wince as we halt at the first military structure since Shoeburyness barracks—a small building signposted LANDWICK LODGE. Beyond a chain-link fence two stocky horses, one chestnut the other white, eat crab apples that dangle from a tree. A sentry leans in the passenger window while the driver deals with the formalities. The car glides forwards again as we are waved through the wire. We are enclosed in the sterile area.

‘You see what I’m up against,’ de la Cour said, as he reached behind and picked up his nutcracker. ‘What I wouldn’t give for some simple iron and shot. But, these days, needs must we act faster! The government is compelled to be more deliberate. The gamekeeper has turned poacher, as it were. We can’t just pop a physics-package…’

Wait, we didn’t cross water—‘Driver? Is this the island?’

‘Not yet, sir. The rolling bridge’ll take us over Havengore Creek.’

‘…We can’t just pop a physics-package in the first-class post!’ de la Cour said. ‘Aeronautics! New-fangled communicadoes. Vulgar modern HQs, all concrete, steel and glass right down to the lavatory brushes—they seem confident enough about their future, but one wonders what kind of future it will be for the rest of us. You follow?’

‘They seem determined to put the Industrial Revolution in their shade, but if you ask me, they’re more likely to deposit us all back in the Dark Ages. So many lessons not learned from the first time around. Combustion is essentially a myth, yet people persist in believing that when a thing burns it disappears!’ He reached behind for a nut and waved it in the air to suggest something evaporating. ‘But when a thing is burned it becomes compounded with elements in the air, yes? A lump of coal, once burned, is heavier than before, did you know that?’

‘—How much more, then, with fission, has combustion become a complete misapprehension? When uranium is simply shuffled along the periodic table a bit? Uranium, neptunium, plutonium. Transmutation. All that energy! Finally alchemy really genuinely works and we should all be living like kings, really. Instead we make a plutonium bomb! It’s like cracking somebody’s skull with the Venus de—BOLLOCKS!’

De la Cour groaned as the remains of a musket ball crumbled from the nutcracker in his hand.

The above is an extract from David Henningham's upcoming novel, Foulness, from Unbound Press (2022). To support this community-funded publication, visit the project page.

A longer extract is featured in our print issue. 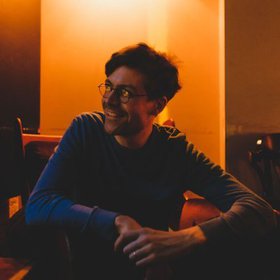 David Henningham is an author, bookbinder and publisher. He is co-founder with Ping Henningham of Henningham Family Press.