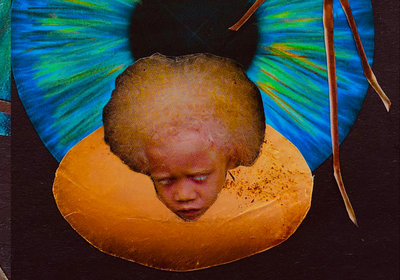 Haiti and the Homunculus

Aina Hunter’s haunted novel, Charlotte and the Chickenman, is a David Lynchian grotesque that unfolds in a surreality that hovers between dream and nightmare. Charlotte, the protagonist, oscillates between realities and identities throughout the book. Her fragmented nature is reflected in the world she inhabits that fractures into vignettes in different spaces and times. She moves between the Haiti of the near-future (2048 to be precise) and moments in her past that span from her time at school to her inauspicious birth. The book reads like a fever dream fed by the anxiety of today: festering with horrible election results, an infectious virus, as well as maternal and/or ecological anxieties.

Race, sexuality, and gender are inextricably entwined in this book. Hunter is masterful in capturing the nuances of these identities, depicting them in across a full spectrum rather than the binary that most discourses center upon (i.e. black/white, gay/straight). Charlotte, whose name and age change throughout the story, is a light-skinned black woman who is bisexual and sometimes is described as masculine and others as feminine. The fact that she changes identities mirrors the fact that she lives in a nebulous world in-between the extremes of a binary. The intersectionality of Charlotte’s identities truly capture what it is to not fit in squarely in any part of the constructed world. Shades of skin tone are seen fluctuating in the characters but also in the landscape. Parts of her world become ‘white’ spaces or ‘black’ spaces; ‘female’ or ‘male’. The surreal nature of Hunter’s prose allows the reader to explore these spaces as someone would who does not ‘belong.’

Another common thread is pedophobia; a generalized anxiety, or sometimes even revulsion, towards children. At different moments, we see Charlotte struggle with her sexuality and being attracted to women in the same moments that she is aborting or losing a child. Several times, the fetus or embryo is referred to as a homunculus, an alchemical miniature but fully-formed human being. Like a golem, this is a constructed man used in folklore to illustrate an aberration of man’s creation and to remind us about the dangers of ‘playing God.’ While not inherently evil, there is something nefarious about this creature and the connotation is important as Charlotte contemplates her baby or the idea of a baby. At one point, the characters discuss the fetus as a “hybrid tumor” or a “kind of sex tumor . . . [that] develops hair and fingernails as it grows . . . [and] [s]ometimes part of an eye or a tooth in random places.” The thought of babies, unwanted babies, and gestation as a cancer is nothing new but, through the unorthodox narrative, Hunter gives us different angles of this thought. In this novel, we see the blood but we also see the magic.

Darkly humorous and kaleidoscopic, Hunter’s prose is ultimately the reason to pick up this book. If you enjoy Mulholland Drive or Solondz’s Palindromes, you will enjoy seeing their visual success made textual by this author with her adventurous and experimental form. It mirrors the odd times we live in and it can be dizzying and sad and scary, but ultimately Hunter manages to capture its beauty too. 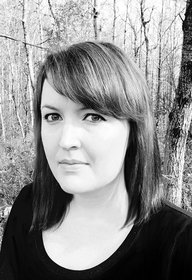 Jesi Buell is an artist from upstate New York. Under the name Jesi Bender, she helms KERNPUNKT Press, a home for experimental writing. She is the author of KINDERKRANKENHAUS (Sagging Meniscus 2021) and The Book of the Last Word (Whiskey Tit 2019). Her shorter writing has appeared in The Rumpus, Split Lip, Adroit Journal, and others. www.jesibender.com