Where the Sky Meets the Ocean and the Air Tastes Like Metal and The Birds Don’t Make a Sound
Mike Kleine and Dan Hoy
Trnsfr Books, July 2021

Mike Kleine’s Burnin’ Oceans is a short work—pamphlet length—that can be reread easily, multiple times. Here, I will attempt to interrogate the work. In the process, I will offer a review containing more words than the text under analysis. I invite others to write even longer analyses of my analysis. Note that this critique is all spoiler, all night long. 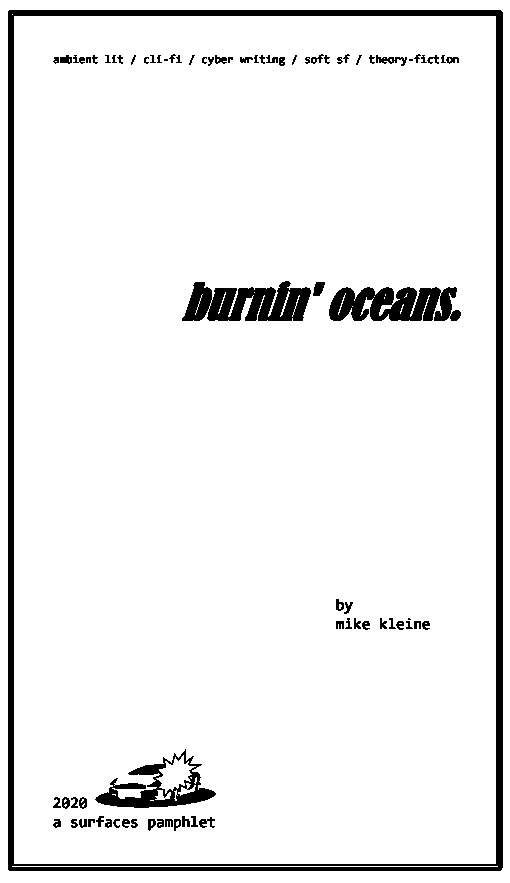 If Burnin’ Oceans is telling a story, what story does it tell?


There is an unnamed protagonist who speaks, at times, in the first person, as “i,” and who is implied in “we.” “i” starts the story and “i” ends the story, within a frame of “instrumentals”—music such as would begin and end a television program. This “i” is never really an agent in the story. “i” does not do anything consequential—“i” only takes self-contained, inconsequential actions such as punching rocks to express frustration. Otherwise, “i” only has things happen to him or her. “i” exists in a dangerous environment, one that has possibly been ruined by humanity, possibly ruined by some natural malevolence, possibly cursed be daemons and black magic, and most probably it is a little bit of all of the above.

There are several named characters in the text. All are part of the peer group or “gang” of “i”, and all have commercialism built into their names; all have alliterating names, and their surnames are brands of luxury cars.

The named characters have various things happen to them and do various things. I believe it is fair to say they don’t have full agency. It is less honest to say that they are characters than that they are elements of the environment of “i”. Some die, some party, some attempt and some succeed at suicide. They may be capable of casting magic spells that permanently change “everything,” but basically they are part of a chaotic, disjointed, both post-apocalyptic and pre-civilized timeless disaster-world. The universe itself is infinite, warped, unsympathetic, and permeated by blue rays of despair. The sky is subject to fragmenting.

There is one apparent attempt at communication—a failed attempt—between “i” and a character named thomas tesla via phone text-messages. “i” appears to bungle the communication, as “i” is distracted by some personal reflections while thomas appears to be trying to communicate a more pragmatic message or warning. The exchange is terminated abruptly.

The characters who are not named are of more potential significance than the named characters. They are largely absent from the story, except that they exist on a sort of different plane from “i”. They are the father of “i”, killed by a tree (hanged? or quite literally killed by the tree?), and an unidentified “she”, who could be the mother or lover of “i”, or could bear some other unknown relationship to “i”. “she” is presented to us as in a kind of permanent state of suspense before an anticipated execution.

It is conceivable that “i” is an orphan whose parents were killed in an earlier time or it is possible that “i” is only fatherless, whereas the death of “she” remains indeterminate. “i” may be despairing of reaching “she” before the moment of death.

The story ends with “i” alone, separated from the peer group, in a bleak, arid, toxic world, both primitive and futuristic, still timeless. “i” is in a separate, permanent state of pre-death suspense, apparently about to be killed by the hostile force of the sun, but it is not certain that the death blow falls before the closing instrumentals.

What is happening with the language in this work?


Kleine’s characters tend to be limited in their ability to emote. They engage in occasional speech events or outbursts, but they do not typically speak at length. They do not engage in the kind of dialog that humans typically engage in. Rather “dialog” takes more the form of individual lines that don’t properly engage with the speech of the other. Comments may be tangential, may only partially communicate, may miss their marks, and may sometimes be apropos by accident. Comments often resemble the kind of communication that takes place in online forums where speech may be ironic, may be pithy, may lack context, but in one way or another the communication is incomplete, unsatisfactory, and does not render itself fully comprehensible. This form of communication suggests the author is protesting the limitations of language for true communication, and he is perhaps highlighting the isolation and alienation that result. In Mike Kleine’s world, due to a kind of language failure, whether physically isolated or together, people inevitably find themselves facing a hostile world alone.


In this work, danger is most often chaotic and impersonal. In the Mike Kleine universe, even “personal” violence in which someone is intentionally targeted has such an unpredictable and arbitrary nature as to appear anarchic and thus “impersonal.” Bad things happen. Whether there is an agent or not, the agent cannot be reasoned with, understood, or deterred. Whether human or inhuman, natural, supernatural, or unnatural, everything is an element of environmental danger.

What does this have to do with Twin Peaks?


Probably not much, though some initial seed of inspiration may have arisen from from the show (and there are indications of many other tangential influences such as Kitano’s Sonatine and several musical works.) Perhaps worth a note, the first image in episode eight of the first season of Twin Peaks, following the instrumental opening credit sequence, is of the sun shining through palm trees, while Burnin’ Oceans begins with burning palm trees and a first glimpse of the hostile sun which seems about to destroy the protagonist in the end. Burnin’ Oceans starts with time code reference to Twin Peaks “part 8”.

What further notes need to be made?


Although there is a pervading anticipation of doom, it seems humanity and culture can never be eradicated. If poetry can nearly be effaced, it still leaves traces (in the form of “smudge poetry” in the sand, and an “o.g. poem” carved in rocks.) Hedonistic pleasure and temporary escape can be had when blending in with the crowd—skinny dipping and vogueing parties beckon—lost hands can be miraculously restored—some lucky bastard may find himself “immune” to acid rains that threaten others. And there is escape into cyclical reviewing of entertainment media.

Sum it up; What’s this about?


This can be about many things, and it doesn’t open up all its secrets to the reader, but I may have found one window into understanding a few aspects of the work. Burnin’ Oceans can be a (qualified) celebration of the relative safety and ephemeral happiness that is enjoyed through appreciation of the arts and connections with close friends and acquaintances, and at the same time it can be a cry of protest that these things are inadequate, that the larger world remains hostile, that we tend to isolate, that language ultimately fails to provide a satisfactory connection with others, that art and friends are fated to dissolve away and leave one stranded. It may also be an expression of a personal loss of a father, or of family members, as well as expressing the feelings of a relationship failure, as the “i” and the “she” are doomed to separate extinctions.

I draw all my conclusions tentatively, as it seems fitting for me to do. Thus is Burnin’ Oceans. 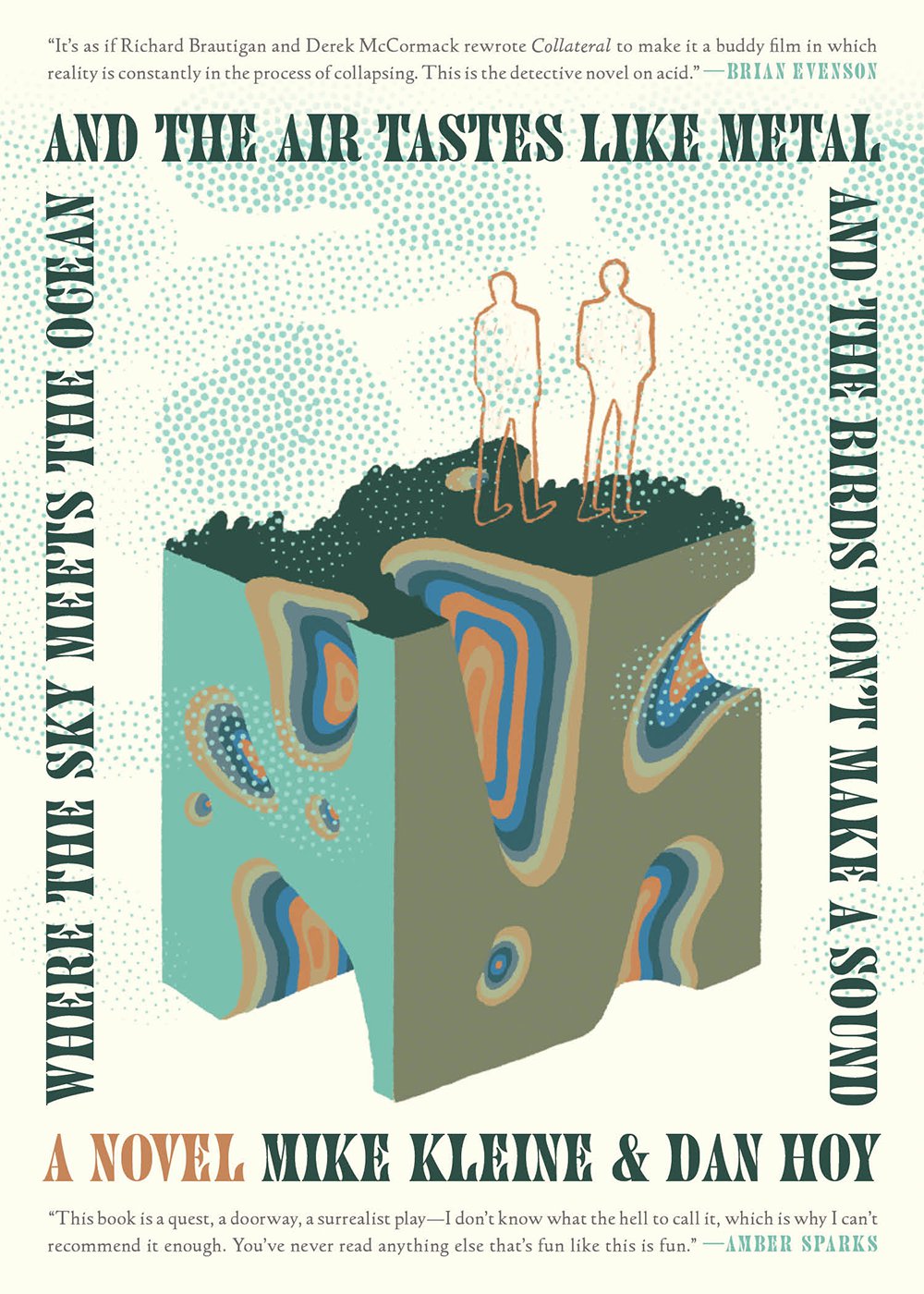 The novel Where the Sky Meets the Ocean and the Air Tastes Like Metal and the Birds Don’t Make a Sound is longer than Burnin’ Oceans, and therefore I will deal with it more briefly. It is coauthored by Mike Kleine and Dan Hoy, and it appears that in Hoy, Kleine has met a kindred literary spirit.

I have seen the development of Kleine’s universe through five prior novels now and several shorter works between, each of which has its own unique charms. His books find ways to intersect with one another through commonalities of style, recurrent characters, and shared thematic obsessions. Now, Kleine and Hoy’s new work forms another link in the chain. What makes this one distinct from Kleine’s solo works is that, on a superficial level, it adopts a more conventional narrative thrust. It takes the form of a buddy adventure driven by a central conflict.

The two main protagonists—Michael and Daniel­—are agents in ways that the characters of Burnin’ Oceans are not. They have agency in their own story, and literally they are investigating agents seeking to “solve” a murder mystery.

Now, the very premise of trying to solve a mystery through logical deduction in a world where events are not linked by clear cause and effect, where there is no dividing line between the natural and the supernatural, and where powerful, rich, and hedonistic entities carry out various obscure plots from somewhere in the shadows, is fundamentally absurd—which is why Michael and Daniel mainly do their investigating through a combination of brutal interrogations (alienating us from them as humans) and legwork, following leads from one strange character and one exotic locale to the next. This formula, and the tension between established expectations and the novel’s refusal to fulfill them, undermine the conventionality of the plot and reveal its function as a mystery-laced parody on the level of story and a playful literary experiment on the level of style.

If there is a cinematic analogy to this book (as there often is in a Kleine project, with or without coauthors) it is as if two Lemmy Cautions had dropped out through a crack in Godard’s Alphaville, and then they found themselves in a world of Darq Magicks, centaur men, melting skies, and cult-like organizations such as the Architects of Q’Noor.

In between the casting of spells, the attending of parties, the encounters with mortal danger, the inventorying of items of clothes, and the making of many life and death decisions (“but mostly death,” thinks Michael), we stumble upon one of the most entertaining chapters, a listing chapter that identifies all the conversation topics between two characters that we presume were discussed in a few hours, though it should have taken years to treat them all with any depth. This chapter should tickle the fancy of fans of the time-honored listing tradition that spans both pre-modern and post-modern fiction. And if you’re a practitioner of bibliomancy, you may want to use this chapter to random-select the next conversation you have with your friends (try “mirror neurons,” for instance).

And then comes the final culmination, a deadly clash with ancient and mysterious forces, and if you think I’ll spoil the plot now, sorry, I forgot to tell you that I switched off spoiler mode several paragraphs ago, but don’t you fear. Whatever doom may come to our protagonists or their nemeses, the Mike-Kleine-and-Dan-Hoy universe will persist in all directions and all dimensions, perhaps damaged, perhaps forever changed, but never able to be snuffed out. And whatever remains churning in it’s darq, mysterious heart, we can be sure this universe will regenerate new terrors and new joys in whatever text these gentlemen cook up next. 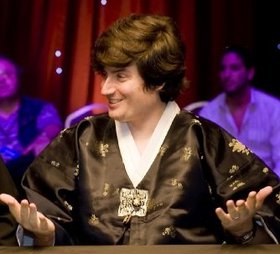 Paul John Adams is the author of To Fail With Flying Colors, a novel of psychiatric quackery. He currently resides with his wife and kids in Glen Allen, Virginia, USA. Paul can occasionally be spotted gambling it up in the "Big-O" game at the Maryland Live! Casino and is otherwise invisible to the public. But, online, you're welcome to spy on him via Twitter @PaulJohnAdams.