This is always a special day for me. Oh, I know, it’s Boxing Day, and even though I’m an American, I’ll be obliged to entertain guests today, because my wife Natasha is from Trinidad—once a far-flung corner of the British Empire—and she shares the British delusion that Boxing Day is an actual holiday. It’s basically like an off-brand Christmas. We’ll have a big lunch with relatives we didn’t see on Christmas Day and exchange gifts, which—although no one will officially admit it—are often re-gifts, an opportunity for everyone to fob off their disappointments and rejects from the day before: novelty pens, electric pasta forks, holiday-themed pajamas. So I haven’t fully emerged from the woodchipper of the holiday season yet. But I’m feeling a kind of buoyancy, a sense of gratitude and wonder, the way you might if you’d just escaped a burning building.

I must confess I am one of those people who does not like Christmas. More accurately: I loathe Christmas. I dread its hateful approach, and every year, starting in November, I am seized by fits of Yuletide rage, and compulsively subject my poor wife—who loves Christmas, as all decent people do—to spasms of outraged, spittle-flecked invective regarding the Season To Be Fucking Jolly.

I don’t care for gingerbread houses, elves, or plastic reindeer, and I can’t stand the horrid music, which unpleasantly evokes the polo shirts and missionary positions of the Eisenhower Era, and by Christmas Day I’ve been forced to endure those two dozen canonical songs in every public space for nearly two months. Santa Claus is vaguely pedophiliac and also just plain stupid. The geographically-disadvantaged toy workshop presents obvious logistical issues, the invasive tracking of naughty-or-nice metrics violates any number of European privacy laws, and a fat old man who insists upon delivering gifts by cramming himself down smoking chimneys sounds like a surefire candidate for the Darwin Awards. I’m sorry, Virginia, but Santa is a slapdash assemblage of codswallop foisted upon gullible children by corporate advertisers, and your friends are right to scorn you. I wish we had a Krampus tradition in this country, a malignant, leering, red-eyed Krampus prancing behind an enormous coal-black phallus, a truly pagan Krampus who would induce brain-exploding seizures of Puritanical outrage in Fox News commentators every December. That would be something to be merry about.

I would prefer to spend Christmas as the Jews do. With other Jews. In a Chinese restaurant, followed by a movie. Every year, I devote resentful hours of thought to the liberating possibility of converting to Judaism, but no one would take me seriously—I just want to be Jewish, not a practicing Jew—and besides, my conversion would just saddle me with all sorts of additional social obligations, and the goyim would still make me do Christmas.

Admittedly, I do like Midnight Mass. I’m not much of a churchgoer, but I like the warm darkness and the flickering candles, the organ and the choir and the majestic Baroque carols, the big-hearted solemnity of gathering together with strangers in a place that is not a sports arena or a bar. I like Christmas trees, too. That’s a lovely tradition. The evergreen scent, the lights, the gold and red.

Oh, but the presents. The presents ruin everything. They look nice under the tree, all the fancy wrapping and ribbons, but why can’t they just be symbolic? One year I came up with the idea that everyone should just give each other figs. You know, those clever little circular packages of dried figs they sell at the supermarket? Everyone likes figs. They are cheap, they are nutritious, and they are vaguely Biblical. You wouldn’t have to wrap them because everyone would know that you are giving them figs, but you could wrap them if you felt like it. Re-gifting figs would be a breeze.

Because it wears you down, the sheer ugliness of the frenzied consumerism. Charlie Brown was right to be troubled by it. Christmas is supposed to be a season when you take stock of your shitty selfish nature and think of the less fortunate for a change—peace on earth and goodwill to men—but it's just an orgy of thoughtless greed. Gimme gimme gimme. Xbox. iPhone. Roomba. Fifty-five inch flatscreen with five-speaker Surround Sound so you can watch George Bailey sacrifice ambition and opportunity for the sake of community service in high definition OLED. Like, not to shit on anyone's parade, but there's an Australia-sized wad of plastic crap floating in the Pacific, the fish are dying out, the glaciers are melting, and polar bear cubs are floating off into the sea. I don't want to be the tree-hugging sourpuss at the holiday party who whines, Come on, people, think of the planet—but Come on, people, think of the planet! Why won't you merry-making assholes think of the planet??

But what I hate most about Christmas, the real underlying nugget of radioactive hatred, is that it is socially obligatory. You are not allowed to opt out. Think about it. You can opt out of birthday parties. You can even opt out of your own birthday. (It’s delightful.) You can opt out of dinner dates, dentist appointments, and poetry readings. You can opt out of weddings—that’s what RSVPs are for. You can opt out of funerals and send flowers instead. But you can’t opt out of Christmas. Even if you try—and I have—you will just sit by yourself in an eerily quiet apartment subjected to Dickensian visitations from the Ghost of Christmas Guilt, and you’ll wind up spending the whole day feeling resentful and sorry for yourself because you have to spend Christmas Day alone. And so, against my will, I will be be dragged away from all the things I need to do or like to do, forced to lug shopping bags of laboriously wrapped gifts on busses trains airplanes so that I may ritualistically distribute these perfunctory and unnecessary consumer goods to various relatives, and I must in turn receive items I do not want or need which will take up precious space in my apartment, I will overeat pie eggnog nuts fruitcake because I have no self-control, I will gain ten pounds and spend the rest of the year trying to lose five of them, I will have to keep up the exhausting pretense that I am brimming with joy because this the Happiest Time of The Year and everyone will strain to be painfully nice to one another because no one wants to spoil Christmas because spoiling Christmas is the moral equivalent of kicking a puppy.

All of this is undeniably true, but….

It often takes me all of January to recover from it.

The rage, the shame. The apologies.

"December 26" is an excerpt from "Appendix", part of Gore's forthcoming collection, My Life of Crime: Essays and Other Entertainments (Sagging Meniscus, Sept. 2022) 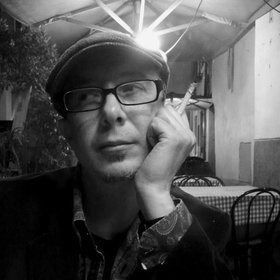 Tyler C. Gore lives in Brooklyn. He is an editor for Literal Latte, the venerable NYC-based literary journal, and his essays, reviews, stories and poems have appeared in a number of journals including Statorec, Rosebud, The American in Italia, Opium, and The Washington Independent Review of Books. “December 26” is adapted and excerpted from “Appendix,” an essay which appears in his debut collection of work, My Life of Crime: Essays and Other Entertainments (Sagging Meniscus, 2022).