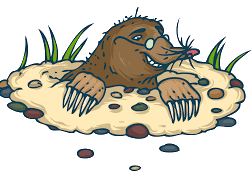 .00am: There’s no daylight at this time of the morning but my neighbour’s security lights compensate for that. At the back of the house, music leaks from the garage where the radio is left to play all night to dissuade would-be intruders.

A car drifts by with searchlight headlights. A robin is singing down by the railway line.

On, past the stone owl, fox and eagle arranged on the hardstanding under the washing line which sags under the weight of half-a-dozen wet t-shirts.

Into the park where a heron flies over the SpongeBob SquarePants merry-go-round and the ducks pad listlessly around the pond. A small bag of dog shit has been left on the stone lip of the temperance fountain.

7.00am: From the first-floor window of the delivery office I can see the church gardens are almost deserted. One man in a black hooded top sits alone on a bench in the lee of the church tower. I watch as he gets to his feet and performs an intricate dance routine while clutching a large blue Co-op bag in his left hand. When two other men enter the gardens, cutting through to the bus stop, he abruptly sits back down.

8.00am: At the bus stop the pensioners are in conversation. “When the weather’s like this you wouldn’t want to go abroad anyway, would you?”

Inside the delivery office, my colleagues are in conversation. “We didn’t just win it, we bossed them. We bossed them off the park”.

On the expensive new estate, a woman is in conversation with her dog walker. “I’m going to have to buy a new wet suit, I can’t get into the one I bought last year. Tim’s going to have to get one as well, his is two years old!”

“Morning!” I say to the builders in the driveway of the house they are working on. They both look up briefly but don’t reply.

10.00am: At the big new house in the picturesque village on the moor I knock on the imposing front door. A school mate I’ve not seen for thirty-five years appears at the window. He doesn’t recognise me. I hold up a parcel and he holds up two fingers. “Two seconds!” he says before revising his estimate, “One second”. He then disappears for a total of thirty-three seconds before returning with the key to the door.

At the house with the breathtaking views, I ask if anybody recognises the name on the handwritten letter from Denmark with no number on the address. The woman who rarely smiles says she doesn’t. “Ask them at 28” she says, “They’re really nosey. If anyone knows, they will.”

The horse in the field at the side of the track down to Moor End Farm always stares at the van as I pass. It seems surprised. Every day it’s as though it’s just there looking over its wall and it sees me in a bright red Peugeot Partner, and it thinks “What the fuck is that?”

11.00am: The man in the shorts, neon trainers and mirror sunglasses is dragging two English bulldogs along the tow path. He calls one of them Rogue and the other ‘You fucking spaz’.

“D’you drink beer, lad?” asks the man in his 60s who is shovelling hardcore into the potholes of the muddy forecourt of the brewery. “Yes” I say. “Well, we’re having a do on Saturday. Get yourself down here and bring plenty of money.” “I’ll be working” I explain. The man turns his attention to the woman in the pink anorak who is passing with her dog. He leans on his shovel, “Here’s a lovely lady for equality!” He shouts. “Equality?” says the woman, looking confused. “Yes” says the brewery man, “Equality for us men”. The woman rolls her eyes and continues on her way.

The woman who is workingout to a loud high-energy soundtrack doesn’t hear me when I knock at her door, so I leave her parcel with her neighbour, the man with the dinner down his shirt whose doorbell sounds like a chaffinch.

The Iceland delivery truck is parked up in an isolated spot on a country lane in the woods while the driver uses it for cover. He's pissing into the mother-die on the verge, he has his cock in one hand and a cigarette in the other.

1.00pm: It’s raining beech nuts at Woodfield House. They’re bouncing off the parked cars, the big council wheelie bins, the mailboxes, the stone gateposts and my head. The treetops are alive with squirrels.

On the track down to the farm I pass the bloody remains of a collard dove left on the verge by a sparrowhawk. A few yards further down, a dead rabbit, eyes pecked out by the crows, lies splayed under a five-bar gate.

2.00pm: “Right!” says the man adjusting his face mask and bending for a basket at the entrance to the Co-op, “Cider, milk, sausages”.

3.00pm: I’m having no luck trying to shoo an enormous fly out of the window and the neighbours who live in the house where the man who looked like Charles Bukowski used to live are arguing in the street. They are all wearing their ‘Sunday best’ and the man in his thirties whose shirt is untucked is shouting “I’ve fucking apologised! Why won’t you fucking accept my fucking apology?” He turns to the woman who is retrieving her handbag from a small red Kia Picanto. “This is my day, stop making me out to be the cunt!” A hearse arrives with the word DAD spelled out in chrysanthemums displayed against the side of the coffin. It pulls up in front of the Picanto and the man tucks in his shirt and puts out his cigarette. I trick the fly out of the window but another one comes in before I have time to shut it again.

11.00pm: I’m walking home and I’m quite drunk. I think the man on the mountain bike might be drunk too because he rides into a parked car and ends up on his back in the road. He gets to his feet, wrestles the bike upright and struggles back into the saddle. He spins the peddles wildly but the bike goes nowhere, the chain has come off. He curses. “Hey, Mate!” He shouts as I pass “Do you know if there’s a hairdresser or a barbers open round here?” “You’ll be lucky at this time” I say. He wanders off pushing the bike and cursing loudly. 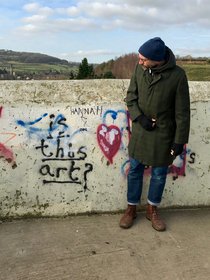 Kevin Boniface, an artist, writer and postman in Huddersfield, West Yorkshire, UK, is the author of Round About Town (Uniformbooks, 2018) and Lost in the Post (Old Street Publishing, 2008).