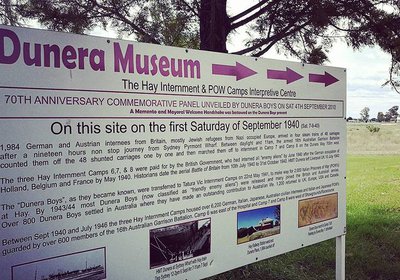 own by the Murrumbidgee River, David eases his truck onto the dirt road, and shines his headlights onto the shadowed path. He’s showing me where I can go running in the morning. The lights glint off the inky shimmering water. We drive through an underpass and the headlights expose murals painted onto the cement. Aborigine art, David tells me proudly. I should look for them when I come back in the morning.

David was waiting at the petrol station when the bus dropped me off. I’d had a feeling he would be there, though we hadn’t made plans to meet until the next morning. He was concerned about me finding my way from the bus drop off to the B&B, so he stood outside the convenience store waiting for me to appear. And I knew immediately when I looked over that he was David Houston, president of the Dunera Museum at Hay, lifelong resident of Hay, New South Wales.

David was a six-year-old boy when the men from the Dunera disembarked from the train and walked to the newly constructed internment camp with its three barbed wire fences and four guard towers. The big children were brought there by their schools, but David came on his own with another boy and the people of the town all watched as the men from the Dunera were led from the train to the camp. David remembers: The men wore odd woollen overcoats, city hats, European clothes.

My father was one of those men, one of the refugees from Germany and Austria rounded up in England in 1940, declared an ‘enemy alien’, and shipped to Australia after initial internment on an unfinished housing estate in Liverpool and after that on the Isle of Man. He would have been one of the youngest men transported to Australia, sent on the HMT Dunera, emerging after weeks below deck, imprisoned on an overcrowded ship, then sent on a guarded train to Hay.

What do you remember about it? I ask David.

All the trains, he says. Hay was a small town. He’d never seen so many trains at once.

Hay was the perfect place for an internment camp, David explains. Far from the coast, far from everything—to discourage escape attempts. But near a rail line, and near farmland so that food for the two thousand men could be supplied. The acquisition of the land, the construction of the internment camp—it all happened quickly. You don’t usually see government move that quickly, he reflects.

Were people here upset that Hay was chosen for the camp? Did they think: Not in my back yard?

They were happy for the work, David answers, happy for the business. The camp needed food, clothing, blankets. The guards wanted somewhere to go drink. The town’s population doubled.

I’ve come to Australia to document my father’s story, try to find the pieces of his history that had fallen away, try to fathom someone who was frequently misunderstood, who I believed I’d misunderstood. David was used to children of former prisoners showing up with similar missions: to see this place that their fathers spoke of so much, to stand in a place that listeners would later say couldn’t have existed. Because how could you explain Britain imprisoning Second World War refugees when it was supposed to have been the place that welcomed people fleeing? How could you explain the need they had to send those refugees someplace so far away from the part of the world where they’d lived up until then?

My father spoke about Australia constantly when I was growing up, remembered it with a weird mixture of resentment and ardour. He fell in love with the country where he was imprisoned, nurtured his memories of it during all the years after the war, after he settled and had a family in a rundown section of New York City. Australia was the place that was unlike anyplace else, with kangaroos and Southern Hemisphere constellations, unstoppable wind and crazy deserts.

The day the men from the Dunera arrived, there was a dust storm in Hay. This happened regularly there—40 degree heat, and a billowing cloud of dust booms: dust in the air, in the men’s mouths, on their eyelids. There was always dust everywhere. The men from the Dunera were to be sent to a different camp, a new one in Tatura where the climate was “more suitable for Europeans.” This was 1941; the Italians came to Hay when the men from the Dunera moved on. David could hear them singing sometimes. They were put to work hauling wood. The local girls thought the Italians were all Valentino. There were Japanese prisoners later on too.

The former internment camp towns—Hay, Tatura, Orange—all have museum exhibits dedicated to the history of those camps, have become sites of pilgrimage for those who know about the use of these isolated places, or are sites of curiosity for those driving across sparsely populated territory. The dark night skies blaze with stars in these quiet places. When David takes me to visit local people or brings me to the restaurant where he’s a regular, it’s like being in any small forgotten place where a newcomer inspires interest.

Who’s this? someone asks, coming over to a table set with paper placements and sweating water glasses.

The daughter of one of the Dunera men, David answers. She’s a writer from London. I’m working on a book, I add. I’m here to do to research.

On the main road, we drive slowly down the single road banked with motels, with brightly lit restaurants for travellers on their way to Sydney or Adelaide.

David’s father was a communist, a principled man, David remembers. He read left wing papers. He knew the prisoners coming weren’t Nazis. They were Jews and there wasn’t any reason to be afraid of them, he told David.

Down by the Murrumbidgee River, everyone used to go swim. There was a girl who drowned there. They had to get one of the Japanese pearl divers out of the internment camp and ask him to retrieve her body, David explains. The diver didn’t want to touch her when he saw her golden hair wavering in the water, furling and unfurling with the current.

We drive up the dirt road, back toward the centre of town. But there’s a cop car on the side of the path, and David, as instructed, pulls over. A young cop comes over to the driver’s door; David rolls his window down. He hands over his license and the cop waves a plastic wand in front of David; he asks David to say his name into it. David does. The cop looks at the wand and confirms that David is not drunk. He hands back David’s license and thanks us for our cooperation.

It’s the first time I have ever interacted with cops in this country. They remind me so much of American cops that, hearing them, I felt disoriented. Cops with funny accents, I thought. And these, I observed, the ones we dealt with here—they didn’t quite have the swagger American police can have when they pull you over. No sunglasses, no slick hips, no sir and no ma’am and no boy.

They weren’t bad, David explains, starting the truck again. They can be a lot worse than that. But it’s helpful to be eighty years old in this kind of situation, he adds. They were looking for drugs. Hay is the stopping off point between Sydney and Adelaide now, and unfortunately a good place to traffic. People have to lock their cars now, lock the doors of their houses, mind themselves.

Down by the Murrumbidgee River, at the end of the dusty main street, past the restaurant where samples of locally grown wool and cotton sit in little piles on display, there’s a museum in the disused train station, and outside it a search light just like the one they used to have at the internment camp. They switch it on at 6:30 in the evening so you can see the searchlight beam up, whiten the dark dark sky. And the museum can be seen from far away—from the elevated highway over there, and from the motels where the travellers to Adelaide and Sydney stay over. They can find out about the prisoners who were once held here—the civilians who were interned, and the prisoners of war.

I imagine being one of those travellers: taking a break from a long drive, from the hum drum of the highway. I imagine getting out of the car, smoothing my clothes, rolling back my shoulders and telling my travel companion that it’s good to be out of the car. I imagine going to the restaurant and telling the waitress where I’ve come from and where I’m going. And I imagine having no relationship to this place. So that when the searchlight beams up, I can turn my head to the sky and make a stupid joke. And when I walk into the museum, every item will be a curiosity to me, something I find interesting because I never knew such things might exist. And when I get where I’m going, I might mention this place and I might not.

And I’ll hear about the children of the former detainees who come here, and I’ll wonder: What’s that like? Do they come here looking for something their fathers couldn’t reveal? Did their fathers, unable to explain why they were interned, feel forever tinged by guilt after they were here? And do those children whose fathers were interned here try to imagine themselves inside the camp, and then stop imagining it?

Or do they walk, like I do, all over the town, catch rides with kind hosts to places their fathers could never see when they were here, think: It is good to be here and see what there was and good to be at liberty. 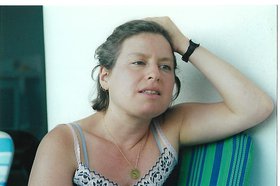 Linda Mannheim is the author of three books of fiction: This Way to Departures (shortlisted for the 2020 Edge Hill Prize), Above Sugar Hill, and Risk. She’s had work in The Nation, Granta, 3:AM Magazine, and Catapult Story. Eimear McBride said her stories “provoke and abide like a slap.” Originally from New York, she lives in London and is a PhD researcher at the University of Westminster. You can find more of her work at: www.lindamannheim.com