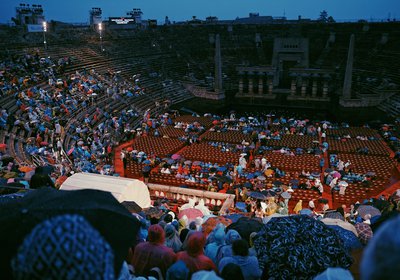 he reading was going fine until, right in the middle of the story, the words leapt off the page and ran out the door. “Wait!” shouted the author, but it was too late—the words were gone. “I’m so sorry,” the author stammered, and he tore out the door and scoured the city streets. He saw lots of words—words having dinner, words walking into a strip club—but none of them were his. Then, walking down Gain, he saw a familiar phrase tripping out of a church. Were those his words? He spotted the face of Consider. They were! “Hey!” shouted the author.

Flamboyant pointed to the church. “Pedra Hahn reading,” he said.

“She just read,” said Floating. “She was transcendent.”

“She’s not still there, is she?” The author was such a huge fan.

The author vaulted up the stairs and into the vestibule, and he could see Hahn in the sanctuary just a few hundred feet away. But then a giant statue of a saint put a marble hand on the author’s chest. “Event’s over,” he said.

The author could see from his marble eyes that the statue wasn’t fucking around. He ambled out of the church and didn’t go back again—not ever, not even when his father died.

I was enjoying the reading until the moment when, about five minutes into the story, I realized that the person in the seat in front of me was also an author. And that the person to my left was, too. Wait a second, I thought. Am I the only person here who is not an author? Fuck—I was! I bolted up and stormed out of the bookstore, and I went home and took a long, hot shower. But the thought that haunted me—that haunts me still—is: Were those people always authors? Or was there something about that reading that turned them into authors? Would I become an author someday? Please God no, I thought. Have mercy.

The author opened the book to start his reading when the smell of marijuana attacked him and he began to cough. “What’s going on in here?” he said to the book.

“Where is your t?” the author said.

Wha looked to its left and right. “Somewhere,” it said.

“Don’t call me authy,” said the author. “It’s author. The author. And you lighten up.”

The author showed up to his reading at a store called Happily Ever After and was surprised to find the place completely dark. The door was open, though, so he walked in and approached a figure dressed all in black at the register. “Hi,” said the author. “My name is—”

“Yes,” hissed the shadowy bookseller. “I know who you are.” She pointed to a back room, where a group of similarly-dressed people sat in a circle. “We’re almost ready.”

“Is that where the reading will take place?”

She nodded. “As soon as they connect,” she said.

The author looked back into the room again and noticed that everyone in the circle was holding hands. “Connect with whom?” he said.

“Of course,” said the woman.

The author entered the room and sat down with the group. Someone took his hands and someone else held his book open for him. “Read into the circle,” said a man across from him. And that’s what the author did—he read his story “The Literary Reading.” It went pretty well, too—the souls laughed at the funny parts, kept gravely quiet during the sadder moments, and clapped graciously when the story was over. Several of the souls bought books, and the author said he was happy to sign them. When he asked one soul who to inscribe the book to, the soul said, “If you could sign it to Cal that’d be great.”

As the author did so—To Cal, he wrote—he said, “Are you a writer?”

“Sort of,” said the soul. “I mean, I’m not published or anything. But I like to write.”

“If you write, then you’re a writer,” said the author. “What are you working on?”

"Tell me about it,” the author said. “And it’s so easy to lose faith.”

Best of luck with YOUR work, the author wrote in the soul’s book, and then he offered it into the void.

And then, right in the middle of the reading, the bookstore sneezed—“Ah-choo!”—startling several of the attendees.

“’Scuse me,” said the store, fishing a hankie out of its pocket and blowing its nose.

The author found his place—it was towards the end, when the dead body appears —and continued reading.

The characters had been talking all fall about unionizing, but the author thought they’d made progress in their negotiations: he’d given them more time off, extra holidays and better health insurance. Apparently it wasn’t enough, though, because right in the middle of his reading the characters suddenly stopped the scene. The author stared down at the page and waited for them to resume. When they didn’t, he whispered, “What are you doing?”

The characters exchanged glances. Then one character—the character of the shadowy bookseller—shouted “Strike!” The character Wha yelled the same, and soon they were all shouting it—“Strike! Strike!”—while the character of a bookstore handed out signs that had been stowed in the margin. All the signs said the same thing: “MORE REST + BETTER STORY! OR ELSE WE’LL MAKE THE AUTHOR SORRY!”

“Shh!” the author hissed at them. “We’re still negotiating, aren’t we? You don’t need to do this!”

“More rest, better story!” they shouted. “Or else we’ll make the author sorry!”

Thinking quickly, the author modified the reading and started telling the story of a strike disrupted by strike breakers, who immediately stormed into the scene. Fights broke out on the page, and then a group of characters near the spine lit a fire; flames roared up from the book. The author tried to keep reading from the burning book, but the bookstore’s fire alarm sounded and a sprinkler went off. The audience ran for cover, but the striking characters hooted with joy and danced in the rain.

In the middle of the literary reading, the reading itself stood up and marched towards the door.

“Wait a second,” said the author.

“No,” said the Literary Reading. “Enough is enough. This is what I’m reduced to? A fucking reading about a reading? Seriously? This is a wake-up call—I’ve got to make some changes.” Then the reading thundered out of the store.

That very night the reading bought some jogging shoes. At first it couldn’t even run half a mile, but soon it had run one mile, then two. Then five. Then eight. That spring, the spry reading placed fifth in its division at the Boston Marathon. (A reading by Haruki Murakami won the Literary Reading race category.) By then the Literary Reading was jacked. Soon it began making appearances again, giving readings of itself. It also started rescuing other readings in peril: it stepped in to save a meandering nonfiction reading in Maine, and did the same a month later at an open mic in Philly.

Week by week, the reputation of the muscular, transformed reading—the Supereading, people called it—grew. Then, the Supereading heard that the author of this story was reading at a library and decided to attend. The Supereading arrived early and sat in the back in a hoodie and baseball cap. As soon as the author began the story—which was, admittedly, quite strange—the Supereading noticed a man two rows up checking his phone. A few minutes later, two people stood up and left. The Supereading couldn’t take anymore; he jumped to his feet, ripped off his hat, and strode to the podium. The scant audience gasped. “Can I help you?” irved the author, but the Supereading edged him aside. “I’ll take it from here,” he said.

Unlike the other readings that he’d interrupted, though, this one didn’t yield. “Excuse me,” said the author. “I’m in the middle of a story here!”

The Supereading gave him a light shove, but the author gripped the podium tightly. The two readings tussled for a moment before the Supereading overpowered the author and pushed him aside. Then the Supereading started telling a new story—a straightahead about a dying man in his last moments—while the author, stubborn as usual, continued his reading off to the side. For a minute, the audience heard the simultaneous readings—the story of the death, and the story of the reading—as two pieces of the same story, aligned in perfect narrative harmony.

Soon, though, no one was listening to the first reading at all. With no audience, that reading started to cough and grew dizzy; then it dropped to its knees, its heart slowed, and loneliness overcame it. The reading sent one last word into the void and died.

The Supereading, hearing the first reading’s last gasp, paused and looked down at the reading’s body. Then the Supereading’s face grew dark. “Ladies and gentlemen,” said the Supereading, “this poor reading is dead. And we need to bury it.” The audience encircled the corpse and someone fetched a shovel. Together, they dug a hole in the carpet and dropped the reading in.

When the burial was complete, the audience took their seats and the Supereading stepped back to the podium. “We are gathered here today,” it said, “to mourn the passing of a literary reading, who died so tragically just minutes ago.” Everyone in the audience was crying. “He was boring and weird, a loser and a freak, but he never stopped trying. You died, literary reading, so that we all may live, and for that we will never forget you. We will hold you in our hearts forever.” 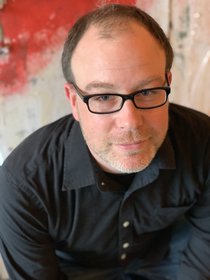 Christopher Boucher is the author of the novels How to Keep Your Volkswagen Alive (Melville House, 2011), Golden Delicious (MH, 2016), and Big Giant Floating Head (MH, 2019). He teaches writing and literature at Boston College and is Managing Editor of Post Road Magazine.