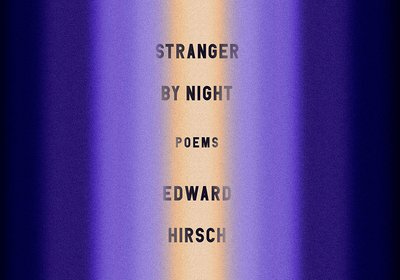 This is Edward Hirsch’s first book of poetry since Gabriel, the epic elegy for his son, and it is in some ways a natural sequel, continuing the grief journey at a lower pitch but with equal intensity and insight. Grief is both an event and a process. This book is more about the process. It expands outward from the horribly unique event of a father losing a son to the other losses that begin to pile up for anyone who reaches a certain age—the age when you begin attending more funerals of friends, and when your body starts taking back its gifts, as in the title poem about the author losing his peripheral vision. This is the age when you let go of inessentials and try to refocus on what matters most, if life lets you.

For Hirsch, not surprisingly, this means falling in love with poetry all over again. I don’t think there is another living American of whom it can more justly be said that his poetry is more than art, or craft, or profession, but a way of seeing, an obsession, a holy calling. Stranger by Night is his book of remembrance, not divided into sections because these poems are all of a piece, flowing into and out of each other like breaths. It begins with a poem called “My Friends Don’t Get Buried” and ends with one called “Don’t Write Elegies.” In between is a whole life, a whole world, or many lives, many worlds.

Among the recurring themes are the poet’s memories of his first jobs as a youth in Chicago—at a train yard, a delicatessen, a chemical warehouse and the infamous Waste Management—and also his first years as a teacher in Detroit and the hill country of Pennsylvania. The real through-line, however, is his lifelong apprenticeship at the poet’s trade, as well as fond recollections (and yes, some elegies) of late poet friends such as William Meredith, Mark Strand and Philip Levine. As he says at the end of one poem, “O spirit of poetry, / souls of those I have loved, / come back to teach me again” (“Days of 1975”). I believe the poems in this book are the answer to that prayer.

Although Hirsch is a master of poetic form (and a master explainer of it: see A Poet’s Glossary), there is no formal verse here. Most of the lines are short, the length of a breath, and many of the poems consist of a single sentence or two with minimal punctuation, line breaks doing much of the heavy lifting. With its memorial mood and quiet accumulation of telling detail, the book feels like a late-night conversation between intimates. It includes us in its confessions: “she was already mourning / for her childhood in the orchard, / her lost self, forgive me, / I didn’t know she was burning / when she took off that black dress” (“The Black Dress”).

Emily Dickinson famously recognized something as genuine poetry by whether or not it took the top of her head off—poetry as surgical saw or shotgun. Hirsch’s effect is generally subtler, but no less powerful. Whether you’re a poetry lover or a poet yourself, you will find that Stranger by Night gives you new eyes, and the top of your head will levitate gently, letting in light for them to see by.