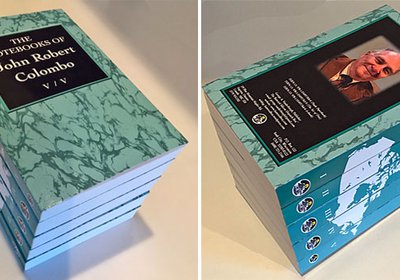 should confess at the beginning that the Canadian poet John Robert Colombo (b. 1936) has been for some four decades now my closest literary colleague. Though we’ve actually met less than ten times, always in his native Toronto, we’ve been in constant touch, initially by postal mail, more recently by email. The best reason for my reviewing his monumental Notebooks (2018, five volumes) is that I doubt if anyone else in another country (aka the USA) will.

Prodigiously productive with books, always from publishers based in his native country, Colombo has published over the past six decades collections of his poetry and translations in addition to anthologies of Canadian poetry and the supernatural and then several Canuck “reference” mausolea, including Colombo’s Canadian Quotations (1994), Colombo’s Canadian References (1976), Colombo’s Book of Canada (1978), and The Dictionary of Canadian Quotations (1991), which all have the distinction of being books that nobody else, not even another Canadian, could have compiled, even if they tried. Produced before he obtained a personal computer, these were produced, heroically we can now say, on cards 3” by 5”. (A favorite anecdote recalls how a publisher contracting one of these books tried to put its own name in place of Colombo’s in the title. After Colombo took home his manuscript that was subsequently released by another house, the offending publisher later commissioned a competitor with its name in the title. Inferior, it stunk and sank.) Oh yes, this Canuck writes in English, clean English, albeit with occasional Anglican spellings.

Having encountered around the year 2000 a “publishing block,” as he correctly calls it, Colombo has been mostly self-sponsoring ever since. His masterpiece is Self-Schrift (first edition 1999), which is a frequently updated compendium (2007, 2015) of “commentaries–anecdotes, insights, appreciations, criticism, ideas, and theories” about the dozens of books published under his name. Every writer should produce this sort of book, even if only a fractionally as prolific. Another exemplary move has been modest self-issued annuals of Colombo’s miscellaneous writings from the previous year.

From a supportive small book publisher, curiously named Battered Silicon Dispatch Box, with addresses in both Ontario and Wisconsin, now comes The Notebooks of John Robert Colombo in five volumes with over one million words, totaling over 2300 pages in sum. These books contain a rich amount of commentary and information on a great variety of subjects, most of it engagingly written as well as easily skimmed; so that once I began the first volume, I stayed up well past my bedtime to finish it. Later I’ve read all five at a beach between fits of swimming.

One theme is the immense range of Colombo’s experience, or at least of what he chooses to write about; and this in turn reflects his extraordinary powers of understanding. As a writer he seems to be, in Henry James’s words, “One of those people on whom nothing is lost.” As these five printed books lack an index, be relieved that the generous publisher promises to “provide the purchaser with a searchable PDF” on request.

His favorite subjects are Canada and Canadians (and particularly Toronto and Torontonians) about which his curiosity and knowledge are bottomless. His Notebooks include not only thumbnails of both his literary colleagues and historic politicians, but much (new to me) about supernatural experiences, which became the stuff of a few dozen Colombo anthologies. Surprised I was to learn of his lifelong interest in the forever unfashionable century-old ideas of G. I. Gurdjieff and P. D. Ouspensky.

Because Colombo was initially a poet, rather than, say, a newspaperman, whatever he has to say comes at a length most appropriate for his thought. So some entries are a short paragraph, while others run for several pages. Because he was never an academic or otherwise an institutional factotum, he’s an exemplary free-spirit. In one of his more audacious moves Colombo counts the number of times his and his wife Ruth of sixty years have made love. (As it’s nearly 15,000, shouldn’t this be noticed in World Records or, at least, biographical encyclopedias of writers?)

Since he long ago copyedited other authors’ books for Toronto publishers, I was surprised to find “principle” repeatedly confused with “principal” and then whole entries duplicated and, in one case, even triplicated, sometimes just a few pages apart. (Too bad he didn’t show this to me before printing? Tsk, tsk.) Since Colombo gathered his entries by subject, rather than chronology, say, I wish he’d put the dates of original authorship at the beginning, rather than at the end, which was sometimes too many pages away.

May others enjoy knowing Colombo, if not as personally as I have, because his writings will survive him, as will this book. He’s a Canadian treasure that can be successfully exported, if less lucratively than furs and oil. Indeed, literary immortality should be the aim of any writer productive past the age of 80, as Colombo is. Likewise, the measure of any ambitious small publisher should be sponsoring books likely to survive their authors, as the best books can do, especially at a time when pre-owned books have become so plentifully available over the Internet. 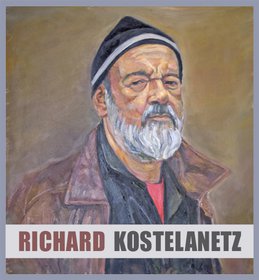 Individual entries on Richard Kostelanetz’s work in several fields appear in various editions of Readers Guide to Twentieth-Century Writers, Merriam-Webster Encyclopedia of Literature, Contemporary Poets, Contemporary Novelists, Postmodern Fiction, Webster's Dictionary of American Writers, The HarperCollins Reader’s Encyclopedia of American Literature, Baker's Biographical Dictionary of Musicians, Directory of American Scholars, Who's Who in America, Who's Who in the World, Who's Who in American Art, NNDB.com, Wikipedia.com, and Britannica.com, among other distinguished directories. Otherwise, he survives in New York, where he was born, unemployed and thus overworked.