Someone to Rely On: Jaimie Batchan's Siphonophore

t’s not immediately apparent what the significance of siphonophore are to Batchan’s novel, which opens in 1701. Carl Linnaeus—the ‘father of modern taxonomy’—won’t discover the Portugese Man o’ War for another fifty-seven years (often mistaken for jellyfish, the ‘Physia Physalis’ are ac- tually colonial animals, consisting of numerous single animals—or zooids—connected to one another, and otherwise known as siphonophore). Besides, a hefty crew of Scottish sailors have a lot worse to contend with. Landing on a narrow strip of land connecting North and South America (Darien, the Isthmus of Panama), the crew from the Kingdom of Scotland are hoping to utilise this strategic stronghold and establish New Caledonia. The voyage, however, hasn’t gone to plan, and the marooned crew wonder about their fate.

Our narrator, ‘fortune seeker, citizen of Darien and Protagonist’, MacGregor, keeps the reader informed of events. As well as speaking out to the reader, MacGregor speaks out to the Council about the New Caledonians’ dire conditions: with a flotilla of Spanish aggressors on the horizon, the crew need to establish defences. But even this is botched, and they eventually find themselves leaving Darien, apart from MacGregor. ‘[A]ban- doned amidst the last crumbling connection to my own people,’ he tells us, ‘I began to commune with myCreator.’ MacGregor isn’t talking about or to a holy deity though, he’s talking about the writer of the novel in which he’s encased.

MacGregor recognises Robinson Crusoe is ‘the entity with whom I share so much’. This is true, but how does he know Defoe’s novel won’t be published for ‘another nineteen years’? It isn’t entirely implausible—Daniel Defoe was a popular, if dissenting, journalist and pamphleteer at the time of the New Caledonian’s voyage, so perhaps MacGregor might have had an inkling of Defoe’s later creation. It’s when MacGregor shows cognizance of his ‘Creator’s’ ‘divine processes’ that we really begin to wonder what kind of entity MacGregor is. He watches his Creator use Wikipedia, make coffee, and visit his GP.

It’s here we learn why MacGregor is so invested in his Creator’s processes: his fate ultimately re- sides in his Creator’s ability to finish the novel. Completion is going to be difficult. The Creator, we learn, suffers from a rare—and real—condition known as Prionic Fatal Insomnia. A frankly terrifying prospect for the sufferer, who experiences progressively worse insomnia and, eventually, death. MacGregor witnesses his Creator undergo ‘sleep hygiene assessments’, ‘multiple sleep latency tests,’ ‘actigraphs’, ‘polygraphs’, and other observations. All very diligent and clinical. The modern clinical world, however, really bristles up against MacGregor’s:

We brought a physician to Darien, but very little medicine was practised. Healthcare amounted to the allocation of bitter herbs, or horrifying ordeals of surgery when nature demanded a more radical solution. Prayer was our repeated prescription, but the modern world has moved on. My creator’s appointments are coordinated through his GP. He’s been swiftly processed by the machinery of the National Health Service. He wanders through corridors reading the signs: ENT, paediatrics, nephrology, tropical medicine; endless avenues of specialisation.

Batchan constructs his own isthmus here: he swiftly connects the typhoid-ridden world of New Caledonia with the modern healthcare system in that middle sentence, ‘[p]rayer was our repeated prescription, but the modern world has moved on.’ The modern world is always moving on for MacGregor; it’s the frequent appointments and ‘endless avenues of specialisation’ of the Creator which are at odds with MacGregor’s world of ‘radical solutions’ and getting the job done in a hurry. Although we might ask of the Creator why they find it so difficult to finish what they started, MacGregor seems to ask, why don’t we turn away from those who claim to have put us here in the first place, even when they don’t treat us well? Indeed, MacGregor mentions Job on a couple of occasions, and it raises the question—whether it’s God, our parents, our seemingly fictional creators—of why we bestow them with the power to do as they wish. MacGregor is holding his Creator to account.

There are a couple of questions, too, for Batchan, the real fictional creator of these worlds. As the novel veers toward more voice and abstraction, it seems almost neglectful to research this historical backdrop, and specific disease, and not explore them further. In spending more time building Darien and helping us understand more about the Creator’s affliction, it might have occupied the reader less with questions of textual authority, and more with the connection between these two worlds, as he skilfully does in the passage above. MacGregor, and perhaps Batchan, can learn from the siphonophore’s collaborative existence in the dark ocean depths—they too need to find someone to rely on. 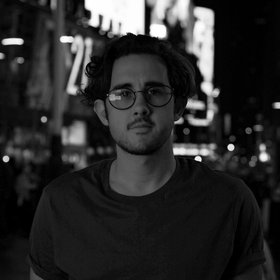 Liam Bishop has been published in Litro, Brixton Review of Books, 3:AM Magazine, and many other publications. He posts the podcast Rippling Pages: Interviews with Writers.