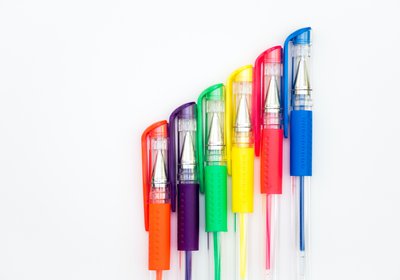 ccording to Darwin, life is nothing but a competition. Therefore, being a competition, everyone would do well to set a specific ranking as their goal. Obviously, for example, many people want to come in first, again according to Darwin. If you can’t come in first in the hundred meters at the Olympics, which seems to me to be the apotheosis of excelling, then it’s better to look for something in which you can excel. In high school, I was the best in the “high jump with a ballpoint pen”.

The “high jump with a ballpoint pen” takes place during Latin class. Put two Latin dictionaries side by side, lying with their backs facing outward, and their pages facing inward. Next, insert a pen across the pages of the two dictionaries, like a horizontal bar. To get over the bar, use a ballpoint pen. Load it by placing it at about sixty degrees, in front of the bar. Then let it go. The pen will leap into the air, and jump over the bar. To sum it up, I was the champion in this discipline, in my class. With my ballpoint pen, I managed to jump over a bar that was a full seven inches high. It took four Latin dictionaries, two on either side, to produce such a height.

In the moment, I was pleased to be the best. But I soon realized that the fame derived from that record was not for me. First of all, everyone kept borrowing my magic ballpoint pen, which was wearing out from so much jumping. Plus, I felt like I had become the center of attention, which I never really liked. And it seemed like all I knew how to do was launch my pen up in the air.

I began to think that it would be better to come in second. I was inspired by Cruijff’s Dutch National team, or Puskas’s Hungarian one, legendary soccer teams that had come in second while being much stronger than those that had somehow come in first. The Dutch had reinvented soccer, as my father once told me, since he had seen that World Cup. Their playing style was “total soccer”, everyone defending and everyone attacking. They were an unbeatable team, the game started and it looked like they had already won. This was true up until they reached the final. Then the Germans got in the way, with their German soccer made up of impediments, and they impeded the Dutch to such an extent that they won the trophy. But in everyone’s mind, that World Cup was forever remembered as Holland’s World Cup.

The same goes for the Hungarians. They too were the strongest of all, they had not lost a game in years, they were in a different league. They too were beaten in a final by a German team, which was not as good, my father used to tell me. It was still not clear how this could happen, but nevertheless Hungary remained a legendary team. I thought about Holland and Hungary for a while, and then one day, during a Latin class while the professor was testing one of my classmates sitting in the front, we organized yet another pen-jumping contest.

That time, I decided to let Brizzano, my desk mate, win. Both of us had jumped six-and-a-half inches. He had a brand new pen; which jumped like a bunny. However, mine was still in good condition, I was sure I could jump more than seven inches, I had already done it at home, though no one knew about it. But I was tired of coming in first, I was still thinking about Holland and Hungary, so I missed the jump. Brizzano’s pen surpassed seven-and-a-half inches and he won. I came in second.

I discovered that coming in second wasn’t for me either. My teammates were making fun of me. I had been defeated. I was a loser. I fell into a kind of depression. I started coming in last in the ballpoint pen jumping competition, on purpose. We had started studying Nietzsche, and I was inspired by him, not the superman-Nietzsche, of course, but the nihilist-Nietzsche. This idea intrigued and confused me. On the one hand, Nietzsche was talking about the superman, that is, about excelling, I thought. Something that I had already discarded as a philosophy, since I had come in first in the “high jump with the ballpoint pen” and I hadn’t liked it that much. On the other hand, Nietzsche was a nihilist, which to my way of thinking meant denying the values of the world. So, if people in the world wanted to excel, then to do the opposite was to lose.

As a result, I decided to lose, no matter what, and losing for me was also synonymous with coming in last, in everything I did. Hence, I began to get the lowest grades in the class in all subjects, even in Philosophy, where clearly I had not understood anything about Nietzsche. Above all, I began to come in last in the “high jump with the ballpoint pen” in which I had become a dud. However, my new, somewhat rebellious attitude, did not go unnoticed by my parents, who gave me a long speech that began with “Listen up” and ended with “bacon”. Coming in last at all costs was not going to work.

While I was mulling over what to do, it turned out, during literature class, that certain writers had written not about heroes, nor about rebels or outcasts who would come in last in the ranking. A new figure of the average man had emerged, and it suited me just fine. Translated into grades at school, it certainly meant getting a pass in all subjects. Translated into performances in the “high jump with the ballpoint pen”, it meant coming in more or less in the middle. If there were twelve of us participating, that is, the boys in our class plus a couple of girls tagging along, I made sure to finish sixth or seventh.

Yet even now, after a while, I wasn’t satisfied. No one noticed me anymore, which would be the aim of the average man, I thought, but it also had the side effect that the two girls who participated in the “high jump with the ballpoint pen”, especially Matilde Mairoldi, the prettiest one, didn’t talk to me anymore. Nothing doing. It seemed to me that I had tried everything, inspired first by Darwin, then by Holland, by Nietzsche, and finally by the average man. But none of these strategies had convinced me. I thought to myself, was there something I hadn’t tried?

Third. I hadn’t tried to come in third yet. Third place, that was a brilliant position to be in. I was podium worthy, but not defeated like those who came in second. I had laurels, but they were not as heavy as the winner’s. Matilde Mairoldi began to talk to me. She talked to me, and I talked back. We saw each other more and more often, even outside of school. While my classmate Brizzano and one of his buddies, who always came in second, were all concentrating on practicing for the “high jump with the ballpoint pen”, Matilde Mairoldi and I were discovering brand new games all on our own. 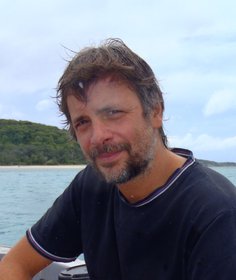 Paolo Pergola is the author of Passaggi—avventure di un autostoppista (Rides: The Adventures of a Hitchhiker) (Exorma, 2013) and Attraverso la finestra di Snell (Through Snell’s Window) (Italo Svevo Edizione, 2019). His work has appeared in several Italian literary magazines. He is a member of OPLEPO/Opificio di Letteratura Potenziale (Workshop of Potential Literature), Italy’s equivalent of France’s OULIPO. He lives in Tuscany and works as a zoologist.