The messages we expected failed to appear.

While we longed for a color to echo,
foreign powers weaponized the voluble gullible.

I formally request a dispatch from the realm
of The Impossible Happenstance and world map
shimmering with the glint of sunlight
on bottles’ lips in ditches.

May all particles and forms align
themselves in alphanumerish order.

Neighbors lightheadedly alert one another.

Thank you, Von Quaglio, who first added
mercaptan to scentless natural gas
and imbued it with a startling odor.

May all breathing beings inhale,
exhale, inhale, exhale over and over.

From one idea a musculature
emerges, strung with nervous
system and various purposes.

Then defensive architecture benches
kept the unhoused from resting.

Among the stars, a shape
of tracery’s glittering trickery.

Who believes the skin
an archive of scars?

The past and its structures
disappeared to dust
and ash and mist?

Eels wriggle great distances
from rivers, streams, and creeks
back to the Sargasso Sea, fins
expanding as they swim.

As aforementioned, I like best
exactish measurements, your
soupçon, your smidgen, your little bit.

We’re all equally susceptible to the universe’s tactics.

Pack sufficient ammo and snacks
for the coming apocalypstacation.

We’ll survive with gumption and serum
of mescaline and adrenaline.

Here on out let us close every document
“The apocalypse barges in all
be-all end-all, bullying and bossing
atoms and orbits around.”

The largest hummingbird on earth
in Bolivia is known as burro q’enri,
Spanish burro for its dull plumage.

I see the name written in a founding
document’s frilly script. Imagine
the body less noun than verb,
event that ends. What is said

sotto voce, held gently
in the cupped palms of parentheses?

to a man’s head to distract
from bald spot. But I want it

all and soon: Dead friends breathing
again, exact food for every hunger,

prosthetic arms but real fingers,
to have whatever kills me kill me

quick, lickety-split, swift
as current through water, as flick of wrist.

You were you but not you,
you know, like in dreams,
or the infinite repetitions
on which two mirrors
facing each other insist.
Pillows await lucky
and cement less-lucky heads.
Bodies auger all manner
of onslaught, respite, beds.
Like me I imagine you glad
regardless in whatever conditions—
sunlight, snowstorms—
happy to be there, feeling it
an honor just to be considered.

Until All the Otherwise We Wish

You may as well ask a taxideried animal—
hide stretched on armature, eyes
polymer resin, posed in lifelike manner—
“What happened?” as demand the minuscule
particles of atoms, obstinately animate,
stand still. How do the gods respond
to hosannas and uvula-quivering hallelujahs?

Aspens trembling in a meadow are one
being’s tendrils, ringed by cartoonishly
colossal rubble. Replacement molecules
and cells align in a body’s particular
patterns, even tattoos of scripture and/or
chimera, impossible, mashup animal.

Ex Cathedra All the Live-Long Day

Enthroned, bath-robed in imagined
sanctum sanctorum, I steeple
my fingers and pronounce
stoic Latin maxims ineptly. Mostly
they exhort to brace ourselves
for the body’s built-in obsolescence,
its time-release indignities.

Be glad at least once an isolated
drop of rain, all surface and interior,
magnified the full moon’s flecked panache.

Let God or whatever iffyness
rush between hearts. Abstruse
should be the color and/or name of a flower
whose innards I inhabit, occupied
by prolonged, inconclusive thinking about a matter. 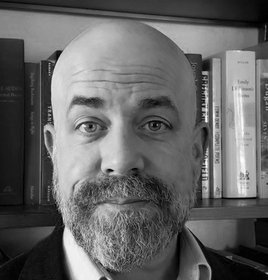 Aaron Anstett's most recent book is This Way to the Grand As-Is: New and Selected Poems. Days, Anstett writes and edits technical documents. Nights, he expands his cooking repertoire and listens to skronky, arduous music on headphones to spare his beloved, Lesley.