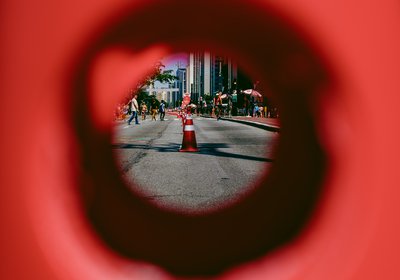 
The City of Holes

The holes are of varying widths and of untapped depths, a matrix of shimmering vacancies, great vaults of absence.

Every living being in the city of holes is held together and connected by holes. Captain of industry. Captain of air. Sailor, baker, mother, lover. Dog, wolf, root, twig. Particle and element.

A hole is not grief. A hole has no language. Yearning, you think, or possibility, but these are only words, with no home in a hole.

The holes in the city of holes cannot be filled by any nameable substance: solid, viscous, fluid, verbal, angel, gas. A hole is not a color.

The city of holes is not a city, of course, which is why it has no limits.

Sneezing is illegal in the Sanitary City. Also unlawful are sniffling, drooling, sweating, and sighing. Kissing! Verboten. All of the walls in the sanitary city are stainless, wiped on the hour. Sheets on the beds are made of paper, all the mattresses are glass. Many people come to the sanitary city for refuge from bodily fluid. Menstruation has been ended. Every insemination is mechanical. There is no fear in the sanitary city, no sorrow, no want, no unintended consequence. Nothing may swim from one life to another. Nothing may float from the breath to the ear.

Persephone could tell you, that fistful of pomegranate seeds wasn’t worth it. Ecstasy is fleeting. Night after night, she is biding her time in this darkness where even the dead have ambitions. And why would they not? Pride outlasts the body. Even self-loathing is a form of hubris.

Where Graves Have No Names

In a city in Europe, a cemetery holds only stones, with no coffins, no bodies beneath them. The stones were re-homed in order to make the original graveyard a field for athletics. For reasons of efficiency, perhaps, or decorum, or sanitary practices, officials of the city in question decided to leave bodies interred. Now children kick balls over bones of the dead.

There is no map, no key to the cemetery holding no coffins. Some stones are polished, carved with the letters of a language no longer in use. Some stones are wordless markers of grief. And what of the pebbles, the feathers, the bent blades of grass?

She covered her face. She tore the damp stuffing out of the past and filled her fists with synonyms. Flung words like confetti, like fairytale feathers, repeating herself again and again.

She believed, in this way, she could bring back the dead, if just this once. 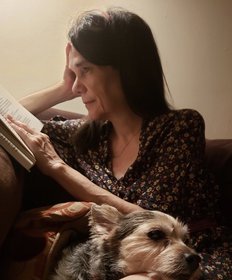 Dawn Raffel is the author of five books, most recently The Strange Case of Dr. Couney: How a Mysterious European Showman Saved Thousands of American Babies. Other books include two short story collections, a novel, and a memoir. Her stories have appeared in many magazines and anthologies, including NOON, BOMB, Conjunctions, Exquisite Pandemic, New American Writing, The Anchor Book of New American Short Stories, Best Small Fictions, and more.