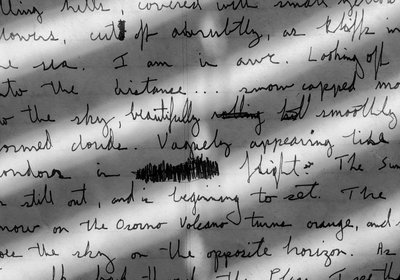 Epigraph for an Unwritten Novel


“How unbearable it would be to die—to leave ‘scraps,’ ‘bits,’ . . . nothing really finished” (Katherine Mansfield).

“Writing is hot and it hurts and it doesn’t make me happy…” (Lucie Brock-Broido).

“There are times when I could be physically sick, the stuff’s so low” (Flaubert, while composing Madame Bovary).

“He declared that his imagination was hidebound; it was there, but it pulled hard. After he got a notion for a story, months passed before he could get any sort of personal contract with it, or feel any potency to handle it…” (Willa Cather on Stephen Crane).

“I have not yet made something that TOTALLY pleases me” (from Vija Celmins’ diary).

“Even in my brain, in my head, I can think and act and write wonders—wonders; but the moment I really try to put them down I fail miserably” (Mansfield).

“I start with a blank, and there’s nothing more horrifying than a blank canvas, cause I don’t have a thought or idea…” (Lee Krasner).

“Think of something…Have an idea. A bright idea” (Beckett).

Spoken in the voice of the Sun: “a cloud intervening… / would be stronger than I and I be discredited” (Marianne Moore).

“All these people are making their mark in the world, / While I, pigheaded, awkward, / Different from the rest, / Am only a glorious infant still nursing at the breast” (Lao Tzu).

Jean Rhys: “All of writing is a huge lake. There are great rivers that feed the lake, like Tolstoy and Dostoevsky. And there are trickles, like Jean Rhys.”

“Therefore, I am not a necessary being” (Blaise Pascal).

“Slowly, to no outcome” (Lyn Hejinian).

“Yesterday was my Birth Day. So completely has a whole year passed, with scarcely the fruits of a month.—O Sorrow and Shame…I have done nothing!” (Samuel Taylor Coleridge).

“He had been trying to live and think in a way that he hoped would end by making a poet of him, but it hadn’t worked” (Katherine Anne Porter).

“No man but a blockhead ever wrote except for money” (Samuel Johnson).

“I have not written anything today worth a sou” (Katherine Mansfield).

“The more books we read, the clearer it becomes that the true function of a writer is to produce a masterpiece and that no other task is of any consequence. Obvious though it should be, how few writers will admit it, or having drawn the conclusion, will be prepared to lay aside the piece of iridescent mediocrity on which they have embarked!” (first two sentences of Cyril Connolly’s The Unquiet Grave).

“Almost every man wastes part of his life attempting to display qualities which he doesn't possess” (Johnson).

“I am but a link in the chain of heretics and failures, a woodwind solo in the interminable symphony…” (Connolly).

“I am irritated by my own writing. I am like a violinist whose ear is true, but whose fingers refuse to reproduce precisely the sounds he hears” (Flaubert).

“nothing but wretchedness and error come from me…” (Pascal).

“I am posing here,” wrote Katherine Mansfield in her journal, “as a lady with a weak heart and lungs of Spanish leather.”

“Thou art infected” (Shakespeare, The Tempest).

“To enter your own mind you need to be armed to the teeth” (Paul Valery).

“August 30th: Morning tears return; spirits at their lowest ebb. Approaching forty, sense of total failure: not a writer but a ham actor whose performance is clotted with egotism; dust and ashes” (again Connolly, my melancholy friend).

“Aristotle writes that you’ll suffer over the mysteries but will learn nothing new” (Brenda Hillman).

“So far I haven’t succeeded. I might not even be a sculptor at all. I feel I don’t understand volumes” (Alberto Giacometti).

“Seems like my life has erectile dysfunction” (Mira Gonzalez).

“Had I followed my pleasure and chosen what I plainly have a decided talent for: police spy, I should have been happier than I afterwards became” (Kierkegaard).

“I hope this preamble will soon come to an end” (Beckett). 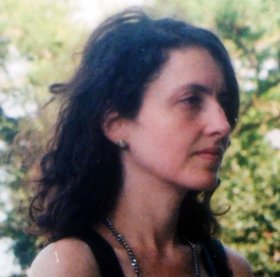 Elizabeth Cooperman is co-author (with Thomas Walton) of The Last Mosaic (Sagging Meniscus, 2018) and co-editor (with David Shields) of the anthology Life Is Short—Art is Shorter (Hawthorne Books, 2014). Her work has appeared in Writer’s Chronicle, Seattle Review, 1913: A Journal of Forms, and other journals. She has attended the Ragdale Foundation Residency, as well as the 360 Xochi Quetzal Residency Program in Chapala, Mexico, as artist-in-residence. Elizabeth is Art Director at PageBoy Magazine, and teaches sporadically as an adjunct professor in the University of Washington’s English Department.