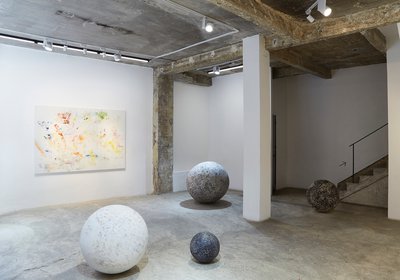 Today's Dreams are Tomorrow's News: On the Art of Murat Yıldız 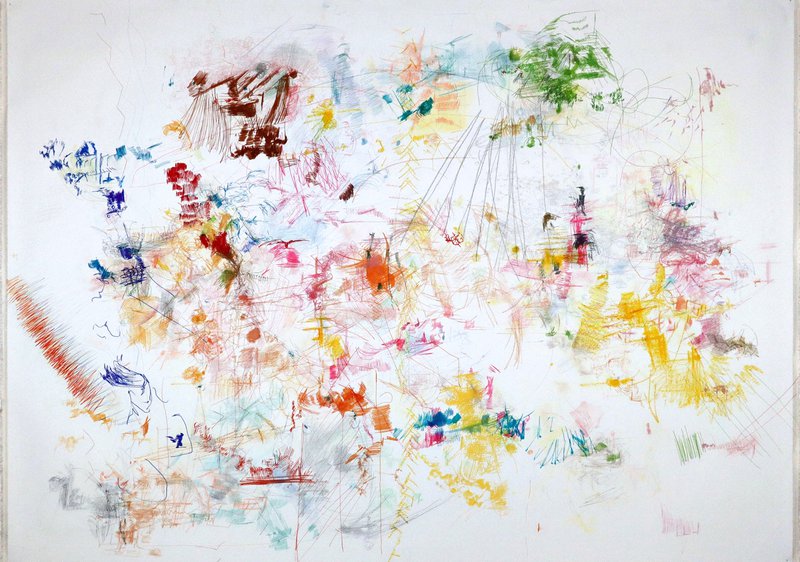 hen I went to Istanbul last March and visited Murat Yıldız at his studio—straight after untimely heavy snowfall had covered the city in white—I found him preparing for his first solo exhibition, currently ongoing at Öktem Aykut.

A succession of bomb attacks that took place in Turkey in 2015 triggered an awareness in Yıldız, which, having centered his production around it, he continues to explore through various art experiments: how people and objects shape one another.

For instance, with his recorder at hand, Yıldız walks for hours across various Turkish cities, recording, as he goes along, every word and sentence he hears. Subsequently, he transcribes them to create non-narrative books made up of words and sentences that are independent of one other.

With this exercise the artist aims to looks at how he is unconsciously shaped by others. He explains:

“When I’m on the street, I keep hearing things and they are most probably, one way or another, unconsciously shaping me. I feel differently if I see people fighting, compared to how I feel when I come across those who are uttering love words or are talking calmly to each other.”

Yıldız is always in deep thought—with a demeanor which suggests he’s hardly ever able to disengage from his pursuit of solving life’s puzzle. The intensity in his eyes reflects the turbulence he seems to be harboring behind a calm exterior.

While referring to a memory from his childhood spent in Balâ (a village near the capital Ankara) around the ages of five or six, it becomes evident that even then his mind was preoccupied with existential reckonings:

“I would run but it led me nowhere because Ankara is very flat and bare. This taught me that no matter how hard I run I will get nowhere."

After offering me some coffee, Yıldız proposes, “Come, be my eye, if you like,” and I accept.

We walk next to a large work on the wall, concealed behind a piece of drapery covering the work from end to end. The instant the artist begins to remove it he immediately shuts his eyes, while abstract gestures made with pencils, pastels, markers and ink on a broad white sheet of paper appear.

The unframed work belongs to his ‘Non-Eye Centric Drawings’ series where, by following instructions given to him by others, the artist looks at how people are able to consciously shape him.

For a while, from where I stand, I carefully examine the relationship between the different interventions previously made on the paper.

“There are two parallel lines running horizontally across the picture. You could draw something in a neutral color to reduce their overbearing presence,” I suggest.

Continuing to keep his eyes closed, he asks me to choose paint from a paintbox nearby. After I decide on a grey pastel, I hand this over to Yıldız and he quietly places it in his pocket.

On the picture plane, I direct his hand to where I wish him to make his mark. Since he will administer this once I have left, in order to keep the spot in his mind, he quickly measures in hand-spans how far it is to the corners of the paper—with the dexterity of someone who has adapted himself to moving without seeing. After that, he covers the drawing and finally opens his eyes.

At first glance, these colorful drawings can evoke the subjectivity of abstract expressionism and its individual effort to create something original. Everyone and everything in the universe are a part of a gigantic web of relations where they ‘shape’ and are ‘shaped.’ While creating, artists are continuously stimulated by people, objects and other entities within their mental and physical radars. Thus, every work of art carries an autobiographical element and when evaluated in this context, ‘originality’ becomes a highly debatable concept.

“Who am I? In fact, I’m the neighborhood I presently live in. It determines how I behave, and I influence how it appears. Nothing is independent of anything else, everything affects everything else,” Yıldız stresses at one point in our conversation.

The artist, who sets no boundaries in assessing how people can consciously shape him, sometimes encourages visitors to spontaneously draw on the paper or canvas, thereby allowing them to contribute directly to his art production – as if to further defy the notion of authorship.

Moreover Yıldız points out that since it’s his partner of many years, artist Defne Tesal, who is most frequently nearby, it is predominantly she who decides on each work’s dimensions, when they are deemed complete and ultimately how these drawings will appear aesthetically. 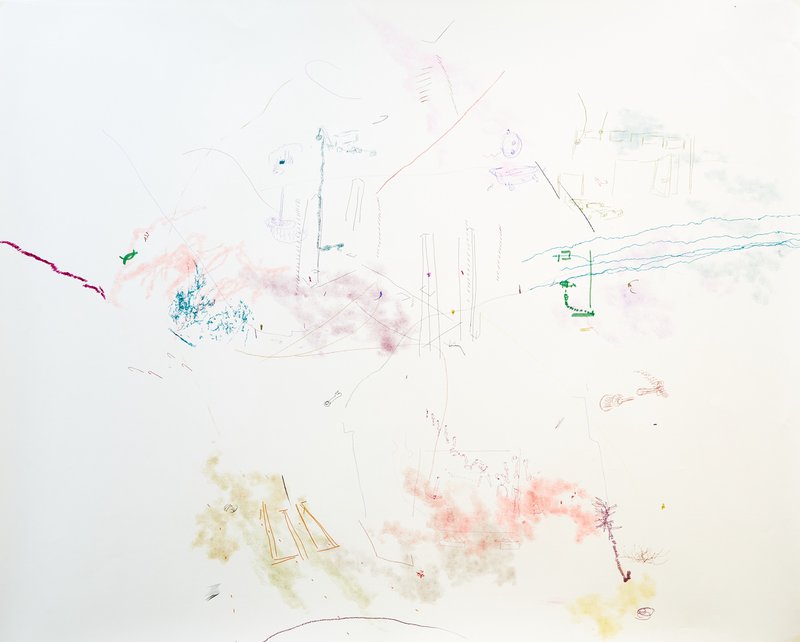 Depending on the simplicity and intensity of their compositions, they reflect a poetic sensibility or with disparate marks overlapping and transforming into scribble, a rebellious kind of exuberance.

Of these drawings which are the product of a collective effort Yıldız says:

“I like the fact that everything is fusing and deriving from itself. On the other hand, it’s chaos . . . Am I creating my own chaos through others?" he asks himself, pondering for a moment. 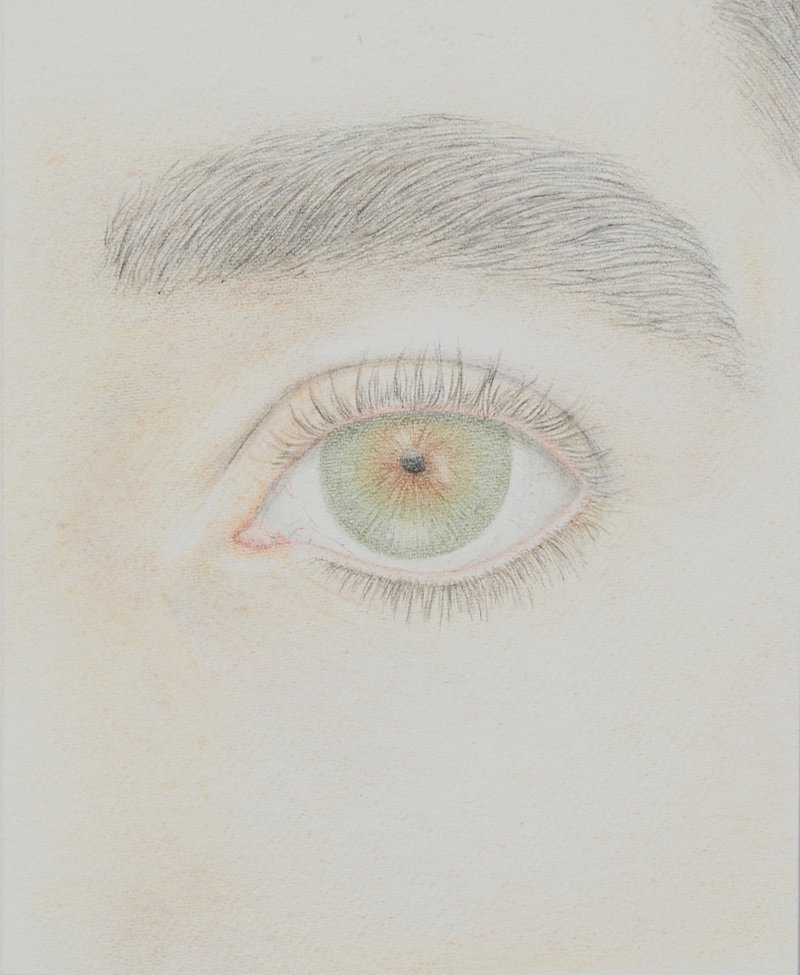 Two works included in the show, which are stylistically at polar opposites with this series, are in fact, in terms of content, directly connected with it. One is “Defne’s Eye”, where the artist has depicted Tesal’s eye.

“The eye is my eye, in other words it’s Defne's eye. I wanted it to represent all the other eyes that have shaped this exhibition,” reflects Yıldız.

The other piece is the self-portrait of the artist with his eyes shut. 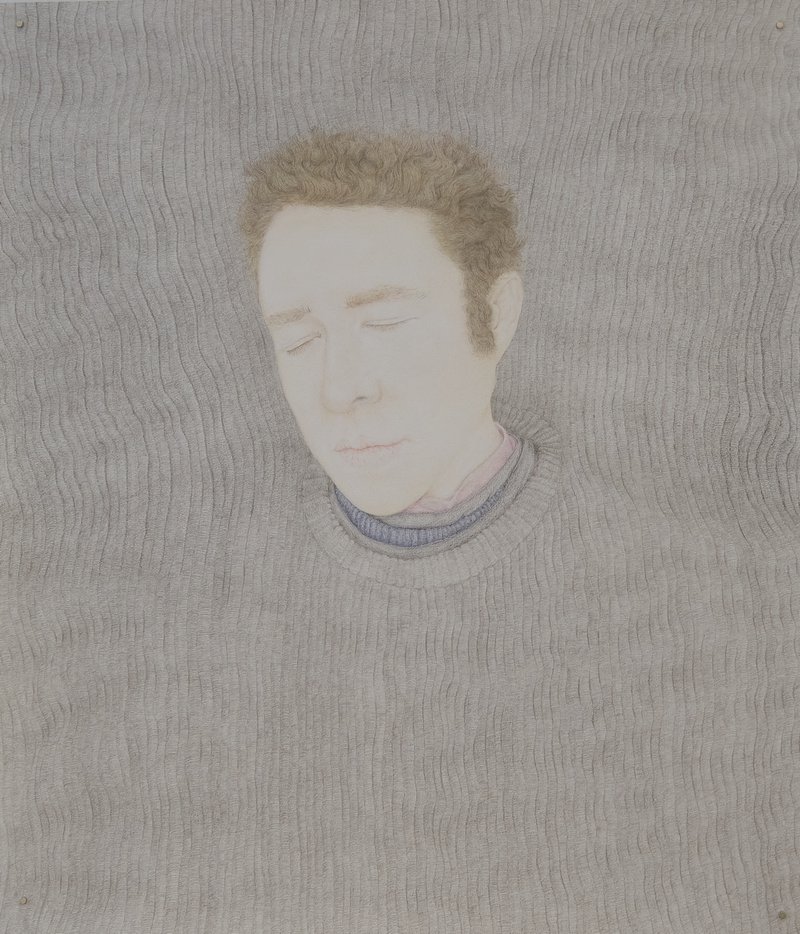 When I come across this drawing at Yıldız's studio it’s at the stage of near completion. While carefully examining it up close, for a moment I’m captivated by the textural softness—depicting every fine detail, including each hair strand, with light retouches—the artist has been able to capture and by the tenderness the work possesses.

“In the picture, I have five sweaters on because I had to wear five layers all winter while I was here,” Yıldız complains.

His ground floor studio, despite a small electric heater in one corner, is still too cold for me to even attempt taking my coat off.

Yıldız points to a few different-sized spheres on the ground—still in the making. He explains that after gluing forty to fifty newspapers together and painting them over, he sands them down to achieve a smooth surface.

“In order to stay warm, I’ve been sanding them down from dawn to dusk,” he remarks with a soft smile. 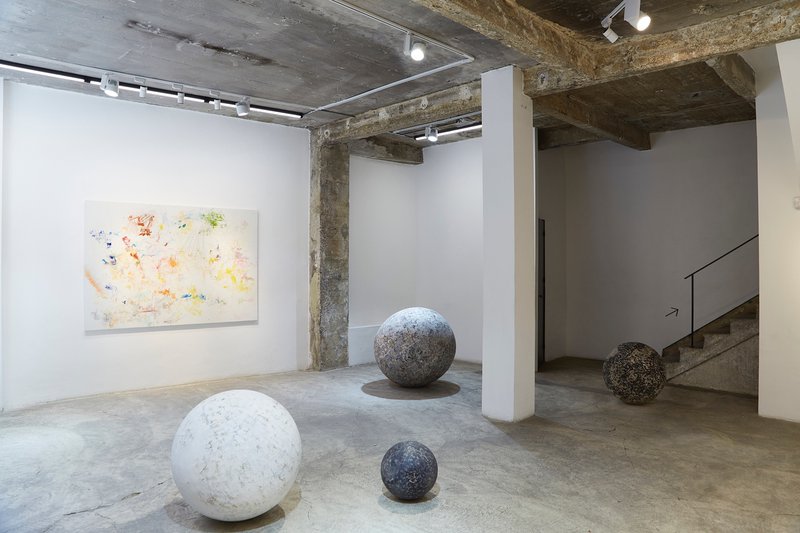 Water is a Sandpaper, You Are My Eye, Installation shot, Öktem Aykut, Istanbul.

These ‘Satellites’ currently being exhibited at Öktem Aykut take the notion of how every entity in life’s ever-changing cycle is ‘shaped’ and ‘shapes’ into a cosmic dimension.

Yıldız remarks: “Satellites circle around planets and appear to be under their influence but actually a planet is also an orbit’s orbiter. I perceive satellites as things that orbit around and affect me, but at the same time, at any moment I can also become the other’s satellite.”

At the beginning of this June, Yıldız and Tesal traveled to Mardin—a city in the Eastern part of Turkey. There they visited Kamer Foundation, a center for counseling and support for women who have experienced severe trauma due to violence, discrimination or sexual abuse. There, for four days, the artists encouraged refugees and asylum-seekers from different ethnicities to write down and illustrate their dreams.

While at his studio, Yıldız tells me how, with time, his curiosity for ‘the way people and objects shape one another’ evolved into questions that have paved the way to other art experiments. One of these is, ‘Can people shape their own future?’

Taking this question as a starting point, through an art initiative they have been carrying out since 2019, Yıldız and Tesal visit various institutions and initiatives and offer people there to write down and illustrate their dreams in a big, blank notebook they have prepared in the format of a newspaper. Then they print and distribute this handwritten newspaper embellished with words and drawings full of hope.

Before I leave his studio, skeptical of whether such an exercise could make any difference, I lastly pose the question, “Can people really shape their future with their dreams?”

After thinking for a while, the artist answers with conviction, “Today's dreams should be tomorrow's news—for we have no other choice,” as if to emphasize the importance of never giving up hope, no matter what.

Murat Yıldız's solo exhibition Water is a Sandpaper, You Are My Eye was on display at Öktem Aykut, Istanbul (https://oktemaykut.com) from May 28 to 2 July 2022. 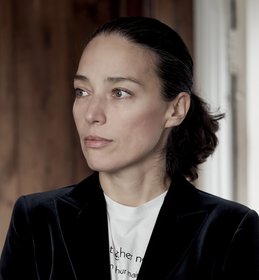 Selin Tamtekin is a Turkish-British novelist and art writer based in London.

Her first novel The Turkish Diplomat’s Daughter, written under the pseudonym Deniz Goran, was published in the UK in 2007 and subsequently published in translation in Turkey, Italy, Germany, Greece and Taiwan.

She is a columnist for the Turkish news website T24. Her second novel The Fugitive of Gezi Park is due to be published, again under the pseudonym Deniz Goran, in the UK by Ortac Press in Spring 2023.